Voot Select unveiled the riveting trailer of the thriller series, The Gone Game 2. Punctuated with moments of deception, suspicion, and unexpected twists, the show promises to provide an edge-of-the-seat experience and take the viewers on a thrilling ride, streaming from 7th July onwards. Directed by Abhishek Sengupta and produced by Bodhitree Multimedia, The Gone Game S2 boasts stellar performances from Sanjay Kapoor, Arjun Mathur, Shweta Tripathi Sharma, Shriya Pilgaonkar, and Dibyendu Bhattacharya, who are all set to reprise their roles, along with Harleen Sethi and Amit Jairath joining the talented ensemble. While Season 1, the first in the category to be completely shot at the home post the lockdown, explored the paranoia of the pandemic and the fear of facing an unknown virus, Season 2, spanning 5 episodes, dives into the post-pandemic world where secrets of the lockdown are exposed, and the Gujral family is under a new, more dangerous threat. 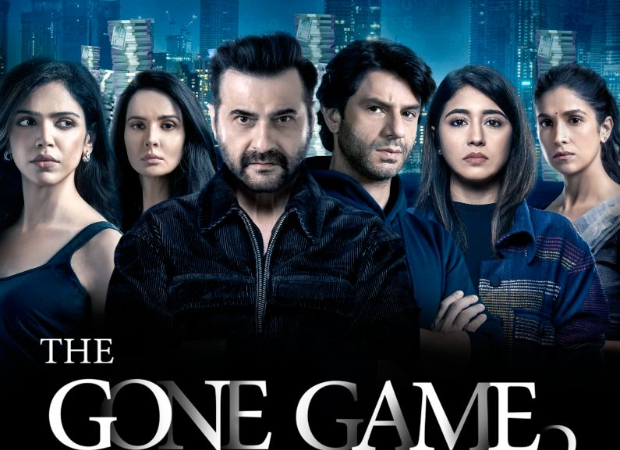 The chase continues for Sahil Gujral [Arjun Mathur] who is on the run after pulling off a financial scam worth Rs. 300 crores. The game gets bloody when Sahil’s wife Suhani Gujral [Shriya Pilgaonkar] is shot days before she is supposed to reveal the truth about her husband. The shocking murder amplifies the scrutiny over the Gujral family as they become prime suspects in a national scandal. Are the Gujrals guilty of murder or is there a bigger secret hiding in plain sight?

Commenting on the launch of season 2, veteran actor Sanjay Kapoor said “Season 1 of the show received a lot of appreciation from the critics and the audiences alike. Be it the concept or the storyline, we managed to break the iceberg and create a space in audiences' hearts. Amidst the Covid restrictions, it was a memorable experience to shoot the series as we were backed by an encouraging cast and crew. The gripping trailer has definitely gotten me excited, and I really hope that the audiences appreciate our efforts in Season 2.”

Arjun Mathur said, “The Gone Game series is a mix of everything - creative storytelling, a gripping plot, a stellar cast and crew, and a multi-talented director who has brilliantly brought it all together. This roller coaster ride is punctuated with double-crosses and secrets coming to light. While the experience of shooting Season 1 was uniquely challenging and exciting, Season 2 was no less than a bumpy ride of its own. Shooting this series outside of our homes, in the physical presence of our co-actors is something we were all waiting for. I really hope that Season Two creates a space in people’s hearts just as Season One did.”

Shweta Tripathi Sharma said, “The Gone Game challenged the creative side and artist in me. As it is, thrillers have always excited me because I find them very engaging and entertaining at the same time. The Gone Game just takes it to a whole new level! When The Gone Game first came to me as a concept, I was definitely intrigued. The cast is stellar – with Arjun Mathur, Sanjay Kapoor, Shriya Pilgaonkar, Dibyendu Bhattacharya - and when I read the script, I knew I wanted to be a part of it. When I spoke to the director Nikhil Bhatt, I knew I wanted to work with him. And what’s super exciting for me is that season 2 has been shot by one of my most favourite directors Abhishek Sengupta. He directed me in Laakhon Mein Ek Season 2, and I feel he gets my best performance out. It is one of OTT's most critically acclaimed shows! Whether it is the music he has done or the way he has shot it, I’m definitely a big fan!”

Shriya Pilgaonkar said, “After an exciting first season of The Gone Game that we self-shot during the lockdown, Season 2 felt like homecoming, and we were excited to meet each other and actually shoot in person this time around. My character Suhani is very intriguing and pivotal to the storyline. The subsequent turn of events that unfolds in this season will be exciting for the viewers to watch. The show has a gripping suspense, and I can’t wait for the viewer's reaction to it.”

Abhishek Sengupta, director of the show, comments, “The first show to have the pandemic central to its storyline, the first show to be crafted from the actors' houses while the pandemic ravaged outside - The Gone Game S1 was unique in every way. The second season gave me the opportunity to work with this stellar cast and embark on a journey to tell a story about human relationships and the masks that we hide our true selves behind. A journey that was interspersed with two lockdowns. Shooting in the midst of these lockdowns presented us with unique challenges. But unique challenges give rise to unique solutions. Especially when you have a sterling set of individuals. Our actors and crew selflessly came together to make this happen and we managed to overcome one obstacle after another in our quest to put out something that the audiences would enjoy. We look forward to presenting the second season to our audiences and hope they appreciate our vision and effort. The suspense of the mysterious death is all set to be unveiled soon on Voot Select.”