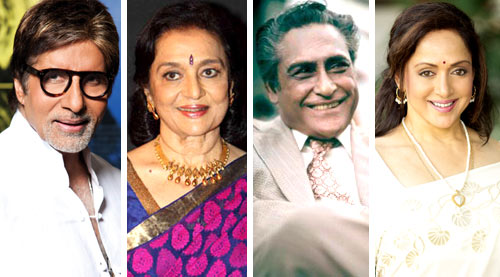 Make no mistake: the month of October sees the birthdays and birth anniversaries of some of the longest-lasting names in the industry. But while that will also be the case with other months, what makes this tenth month stand out is the fact that many of the biggest names have either drunk the elixir of permanent youth or/and have reinvented to amazing extents in their fields.

Amitabh Bachchan: We start with the ever-young global face of Indian cinema - after debuting in the 1969 Saat Hindustani, he is now 45 years old in films alone! Whenever written off, he has bounced back, usually in a fresher avatar. Forget his best entertainers like Amar Akbar Anthony, Hera Pheri (1976), Don, Coolie and more: the man romanced as late as Cheeni Kum (a girl of his age) and Nishabd (a teenager!) in contrasting ways, made an alternate career out of singing from the age of 37 after Mr Natwarlal, was the first corporate entity in Hindi cinema to produce movies (ABCL and later AB Corp), reinvented the father as a protagonist equal to the hero (Mohabbatein, Kabhi Kushi Kabhie Ghamâ€¦ et al) and finally even played a teenage afflicted with Progeria in the path-breaking Paa (2009). He also acted in the foreign film, The Great Gatsby.

And those are only some of his major film accomplishments. Member of Parliament, top model (among stars) and a brand ambassador for Gujarat - Bachchan immortalizes his Kaalia line, "Hum... jahaan khade ho jaate hain, line wahin se shuru ho jaati hai!"

Asha Parekh: Danseuse, child actor to pioneering actress, censor board chief, social activist and (in keeping with times) a successful television producer, Asha Parekh's principal achievements are twofold: this personal reinvention and her being the pioneering actress with the template other heroines followed in the '60s and '70s - the effervescent, pretty and volatile maiden who accepted the hero only after a while. And her breezy but enduring chartbusters are legion.

From her 1959 debut Dil Deke Dekho to her progressive serials, Asha has sparkled in her long career and given new hope (Asha) to so many through her dance academy, her overseeing a reputed Mumbai hospital and other humanitarian activities.

Ashok Kumar: He pioneered natural acting in Hindi cinema, was the first suave anti-hero (Kismat in 1943) and as producer, mentored legends like S.D. Burman, Dev Anand and Ashok's own brother Kishore Kumar and many directors and actresses.

He continued acting till the early '90s, encompassing television in India's first soap opera as narrator (Hum Log) and the title-role in Bahadur Shah Zafar. Till the end, he excelled in every kind of role and genre of cinema, acting so naturally that the viewer felt he was watching a man in real life. Though he shifted to character roles in the '60s (following a 1936 debut in Jeevan Naiya!) after the 1972 Victoria No. 203, we often saw him as a mentally youthful, breezily comic elder protagonist in multiple films, culminating with Shaukeen's romantic act! His last release, Aankhon Mein Tum Ho, came in 1998.

Hema Malini: The eternal Dream Girl who became a huge hit despite a flop debut film (probably the only such example from the 1960s) in Sapnon Ka Saudagar (1968), Hema Malini remained Numero Uno for over a decade, and was an ace danseuse outside films as well. Producer, director, a dabbler in singing, Member of Parliament, and a ballet dancer even today when nearing 70, Hema has even edited and owned a prominent women's magazine. Among the rarer film appearances she still makes, Veer-Zaara and Bbuddah Hoga Terra Baap saw her in spirited acts.

Kader Khan: The professor turned writer and then actor, Kader Khan is not only one of the most progressive individuals but also a legendary writer whose c-v is stuffed with blockbusters of all kinds from Amar Akbar Anthony and Himmatwala to the intense Muqaddar Ka Sikander and Khoon Bhari Maang. His range as an actor is equally broad and spans comedy, villainy and melodramas. He has reinvented dialogues in Hindi cinema alongside Salim-Javed and redefined the parameters of mainstream writing for over two decades.

Om Puri: Perhaps the most seen face in foreign movies, Om Puri has dazzled even in Hindi cinema through roles that have gained him major adulation and awards for his sheer genius at every genre. Language being no barrier to this ever-versatile actor, this Punjabi made his debut in the 1976 Marathi film Ghashiram Kotwal and continues to have fans in Generation Y as he plays characters we can love, hate, laugh and cry with and be supremely entertained too.

Rekha: The Diva who spells reinvention (even as she is playing a young Super Nani now), Rekha remains the elusive female Pimpernel of the industry. From a buxom 'South Indian belle' in early potboilers to the svelte and stylized spinster icon who has played the entire gamut of roles since her 1970 debut in Sawan Bhadon till today, the want-to-be-low-profile-but-cannot Madam Re remains an icon in different ways for a spectrum of actresses and fans.

S.D. Burman: He always made compositions that suited the next decade rather than when they were composed. His track record of success (in percentage of his total work) is unparalleled, though sadly, he is more known today as R.D. Burman's father. From his twin 1946 debuts in Eight Days and Shikari to his last film in Tyaag (released in 1977 in Mumbai - two years after his death), Dada Burman remained the ever-young maestro and conquered charts even when his son and the latter's contemporaries were ruling film music. Along with Jaikishan, he remains the only other composer who was in the frontline right till his death in 1975.

Shammi Kapoor: Changing the very definition of a Hindi film hero and his on-screen approach to the heroine, Shammi Kapoor was as flamboyant in real life as the new avatar he introduced with producer S. Mukerji in Tumsa Nahin Dekha, his first hit in 1957 after four years of struggle. While playing a feisty con-man in Kareeb (1998) and many other spunky roles as a bearded and portly young man even in the millennium, Kapoor inspired a whole new school of acting, heroes and zingy Mohammed Rafi chartbusters, oftener than not composed by friends Shankar-Jaikishan.

Vinod Khanna: The star who shot to the top as a hero after being a 'hit' villain, Vinod Khanna remains the only hero who took a complete break for four years and then staged a successful comeback. This powerful actor and handsome hunk is now a very successful politician as well and is enjoying a leisured run as a successful character actor since Wanted (2009) and the Dabangg franchise.