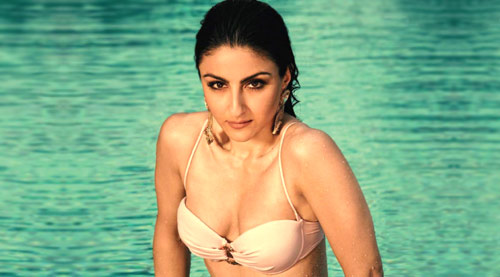 
Says Soha, "Though I've worked with topnotch filmmakers like Rakeysh Omprakash Mehra and Deepa Mehta, I feel my potential has not been utilized to the full extent."


She admits she craves for more from her career. "I am not satisfied with the work I do. I'd like to be part of films that are seen by a wider audience. I am happy with the amount of work I am doing. But I feel it'd be more fun to work with directors who bring a wider recognition to the actors and the films."


Soha is looking for a change of pace. "The films I do are too niche. I wish there would be a wider audience for the kind of films I do. It'd be great fun to reach out to a larger audience."


Soha says acting is akin to a 10-to-5 career option for her. "I am not working for the money or fame. I am in this as a career person who needs to make certain amount money to maintain a certain lifestyle."


Soha says her film career is yet to make full sense to her. "Very frankly my career flummoxes me. I really don't know how well I fit into Hindi films. There're lots of films that I like which don't do well at all. And a lot of films that I don't like which do really well! If I were to think too much about my options as an actor or if I were to do only the films that I believe in, then I might end up sitting at home a lot more. I'm practical in my approach. I choose from what I get. And I like to keep busy. I do enough work to not feel frustrated about lack of work. It's good to be occupied."


Soha Ali Khan says her personal space gives her a lot more satisfaction. "Kunal and I love each other and we're liked as a couple by people. That's quite a comfortable place to be in. My career is important. But the way I see my life I don't wish to be straitjacketed as a career woman only."

Soha recalls her entry into films. "I started in cinema comparatively quite late. Finishing my studies was quite important to my family. My father made me promise to work in Citibank in London for at least a year. I enjoyed it. But my heart was set on movies. I think the corporate experience helped me grow as a human being. It taught me to get on the sets on time."


Though she's on her own, Soha Ali Khan feels the strength of her genes assert itself in the way she's treated in Bollywood. "When I came to Mumbai everyone was so protective and nice because of mom."


"But I've followed my mom and brother's (Saif's) films. Among my brother's films, I like Dil Chahta Hai, Hum Tum, Kal Ho Na Ho, Ek Hasina Thi and Omkara. He's very individualistic. Amma has done, like 200 films. I liked her in Amar Prem, Aradhana and Daag."


Soha admits they're a close-knit family. "My sister has her own jewellery business in Delhi. We see each other as often as we can. I fly down to Delhi to be with my mom and sister at the slightest pretext. With my mother and brother being successes, I've the family reputation to live up to. I'm very proud of my brother. He has a lot of faith in me."


Soha has been brought up to self-dependent. "I'm capable of looking after myself. Both my mom and me are very stubborn people. That helps me get by on my own. I don't think a single woman can be so comfortable in too many cities. I feel very safe in Mumbai. Everyone treats me with so much respect. I guess I have been lucky. But I don't think anyone ever signed me just because of who I am," she says pragmatically.


Though proud to be Pataudi, Soha would rather let her career do all her work. "I carry my family name with me, I must admit, though not with any arrogance. But it does add to my self-worth." says Soha, the daughter of Mansoor Ali Khan Pataudi and Sharmila Tagore and the sister of Saif Ali Khan.


Cinema is Soha's chosen vocation for now. "I'll be around as long as I'm challenged by what I have to do," she says.