Making a lot of noise currently for their wedding is Athiya Shetty and KL Rahul, who tied the knot this January 23rd at Suniel Shetty's farmhouse in Khandala. The couple has been in a relationship for a long time and opted for an intimate wedding ceremony in presence of family and close friends. 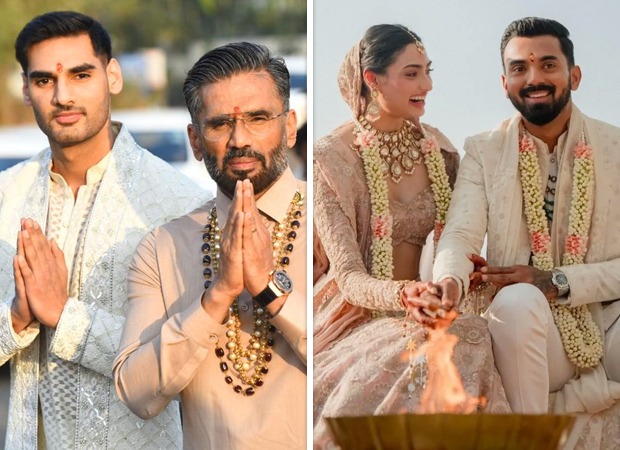 Post the wedding on Monday, Suniel Shetty greeted the media and thanked them for their unconditional love and support. His son and actor Ahan Shetty also joined him as the two of them distributed sweets to the photos and the media stationed outside his residence. “It was beautiful. It was very small, with just close family lekin sab bahut acche se hua (everything went well),” he shared, adding, “Shaadi hogayi hai, father-in-law ban gaya hoon officially (The wedding was completed and I am officially a father-in-law)."

When asked about his new role, the actor said  ‘beta ghar aaya hai‘ (We are welcoming a son at home). He added, “I am a father, and don’t want to get involved in the in-law complications. I ace the role of a parent, and I want to do that.”

According to an insider, the duo would be hosting a lavish post-wedding bash for all their industry friends and colleagues.

Athiyaa Shetty and KL Rahul remained tight-lipped about their wedding. They have been together for a long time and their first official appearance was at Ahan Shetty's film debut premiere in Mumbai.