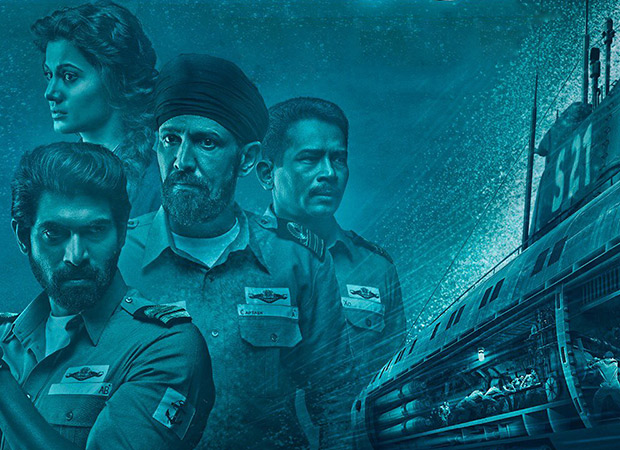 A bigger mystery than the sinking of the submarine during the 1971 Indo-Pak war that this film so bravely recreates is Rana Daggubati’s one single immovable expression that he has been holding steadfast on his impressive face ever since he graced the large screen with his imposing physical presence.

It’s an expression of scowling machismo, a ratification of masculinity and a rejection of all humbug, and that includes changing the expression according to the emotional need of the moment.

Rana plays Lieutenant Commander Arjun Varma. And if you think this is as a filmy as a hero’s name can get, wait till you see the torrent of patriotic jingoism that hits you straight in the face (though alas, not in the guts). The national anthem (which had already played before the film begins, as per the new rules) played in the film before the end when all the characters first sang Sarey jahaan se achcha and then just to drive in the point, Jana gana mann.

Confused, a few members of the audience got to its feet while the others remained seated. Even before the confusion could be sorted, the national anthem played again, this time as part of the background score, and then the film ended in a flurry with the tri-colour held high.

All of this is crammed into the last 15 minutes of this commendable but underwhelming tale of war-time valour. Film editor the brilliant Sreekar Prasad cuts to the chase. There is little room for diversion as the men on board the submarine attend to the task of fobbing off the enemy’s advances. The marginal characters barely get in a word edgewise and before that scared lieutenant gets the first bite of a banana into his trembling mouth, the siren goes off.

A sense of urgency is preserved throughout, with the actors pitching in their most sincere efforts to make the proceedings look authentic.

But it’s losing a battle. In a manner of speaking.

Nevertheless debutant director Sankalp Reddy must be lauded for his vast research on the subject. He lays out the blueprint of the underwater and so far underground, battle between India and Pakistan, with diligence and sincerity. But the director’s epic vision is constantly defeated by the lack of financial sources. 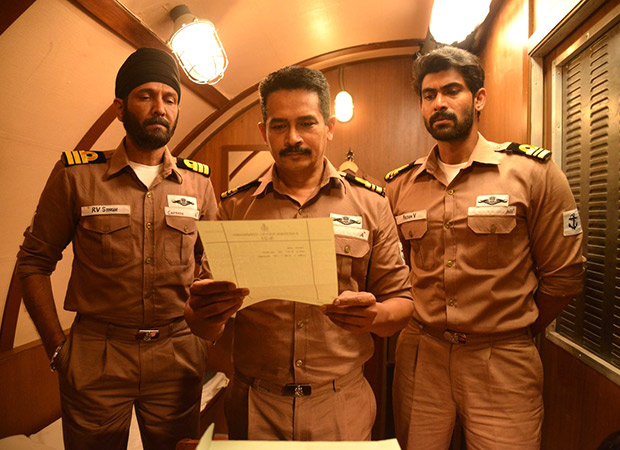 Budgetary constraints show up in embarrassing spurts in this soggy and damp underwater adventure. It’s in the way the actors are huddled on one set depicting the interior of a submarine, or in the way the sea and the exchange of torpedoes between the enemy countries plays itself out that the film exposes its crippling limitations.

While the Indian aside of the battle line comes off with a fair amount of flair thanks to accomplished actors like Atul Kulkarni, Kay Kay Menon and some unknown faces that play fringe soldiers who are never at sea(no pun intended) the Pakistani soldiers helmed by Rahul Singh(who snarls and snaps like an Alsatian denied its daily meat) are pure caricature .The Pakistani soldiers are bathed in the colour green(in case we miss their cultural complexion) .They refer to one another as ‘Janaab’(in case we don’t get the point even after the proceedings go green).

Once we ignore the glaring generalizations and the broadly sketched definitions of valour and patriotism The Ghazi Attack comes across as a film that means well. The director has a firm command over the underwater escapades, more so than the power-tussle in which the commanding officers are shown to be embroiled.

By the time Daggubatti gives his big speech on sacrifices that soldiers make so that we civilians can sleep peacefully the narrative has exhausted its ability to hold our attention. The adventures of The Ghazi Attack are intriguing even exciting to begin with. But after a while repeated shots of torpedoes being fired from both sides gets repetitive.

War, as we all know, is an exercise in futility. This should not be the case with films about war. And God knows Chetan Anand and J P Dutta have shown us how spellbinding war cinema can be, given the required resources.