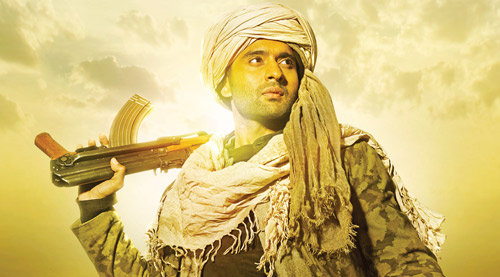 What can we say about a comedy where our two goofy heroes from
Gujarat named Kader and Shammi who end up in Pakistan playing two
terrorists playing Ittefaq andâ€¦.ahem, Wattthefaq?

Don't look at me. The narrative captures the silly sur and clings to
it till the end.

At first, you hate all the suffocating stereotyping. Once our two
â€¦.errrrâ€¦heroes reach 'Karachi' (looks like some exotic non-Asian
destination) we are subjected to a surfeit of terrorists, bombs and
yes, one item bomb named Lauren Gottlieb who playsâ€¦don't laughâ€¦ a
Pakistani Intelligence officer.

Honestly, we could do with less of such aggressive and provocative
portrayal of Pakistan, if for no other reason, than to avoid them on
the other side, making a film where they show every Indian as a rabid
fanatical fundamentalist.


To that extent Welcome 2 Karachi is based on a dangerously regressive
premise: take the two Indian (Hindu) heroes across the border and make
them dodge bombs and bullets like two kids who have run accidentally
onto a cricket field while Dhoni is showering runs.


On the run are two of the most brainless protagonists we've seen in a
Hindi film. To his credit, Jackky Bhagnani remains effortlessly in
character till the end. When an elderly Pakistani patriarch admonishes
Bhagnani for not speaking Urdu, he breaks into a dialogue from
Mughal-e-Azam. That this character should even be aware of Dilip Kumar's universe is a miracle.


In this way, we soon see how the comic element is turned around. And
the stereotypical jokes are eventually on the Indian protagonists who
come laden with ludicrous prejudices and end up going through a series
of bizarre often funny escapades. I specially liked the way some of
the hardcore terrorists display a humane side without even trying.


And the build-up towards a somber climax doesn't compromise the two
protagonists' sheer asininity.

Arshad is as usual the narrative's 'laugh' saver. The problem is that
unlike his screen partner Jackky, Arshad doesn't LOOK stupid and keeps
slipping out of character with extremely urbane and all-knowing
responses to the outrageous palate of plot twists provided to him.
Jackky has no such problem. He remains a clueless Gujju to the end.

It's not easy to make a non-stupid film with two stupid characters at
its helm. Welcome 2 Karachi pulls off that daring feat without falling
flat on its face.


For that alone, this film deserves a bit of our attention.

EXCLUSIVE: "We set out on the path amid…

“You have been an inspiration for me since…