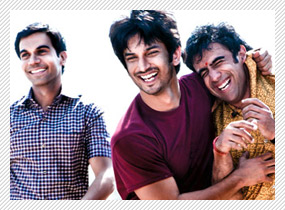 It really can't get any better than this, can it? The year has just begun and we have one of the finest most vibrant and fulfilling coming-of-age films in living memory. Kai Po Che (the war-call uttered during kite-flying in Gujarat) is not about kite-flying. In fact there is just one fleeting sequence, very effectively positioned in the meticulously structured narrative, where the characters actually fly kites. But Kai Po Che is about spirits soaring skywards, as the characters--each one so vividly etched into the compact narrative that you come away with people whom you will probably carry with you for keeps-- let their spirits roam wild and free in the atmosphere soaking in the sunlight of desire longing aspiring stumbling and getting back on the feet.


Set in Gujarat during times of peace and unimaginable stress Kai Po Che takes Chetan Bhagat's eminently engaging novel about friendship among three dissimilar young people struggling to find their voices in Gujarat in and around the year 2000 and converts the written word into an enrapturing entity far beyond just a story well told. The three protagonists joined by a fourth, a girl who happens to be the sister of one of the heroes secretly involved with the hero's best friend, bring to life a world where the accidents of existence collide gently but powerfully with man-made and natural calamities that shake the very existence of an Indian middleclass that lives on the edge where toppling over the abyss is a real possibility.


Sure enough, by the end of the film one of heroes Omi (Amit Sadh) does fall into the abyss of bigot. Thought he is finally given a chance to redeem himself, it's too late. A dream has already died, though another one is re-born.


Kai Po Che is about the shared aspirations of three friends: the reckless and devil-may-care cricketer Ishaan (Sushant Singh Rajput, a remarkable film debut), his cautious shy friend Govind (Raj Kumar Yadav) and their somewhat confused friend Omi, the son of a liberal temple priest who tilts towards Hindu radicalism more out of an economic necessity than an ideological imperativeness.


Into these lives, screenplay writers Abhishek Kapoor, Chetan Bhagat, Pubali Chaudhuri and Supratik Sen introduce a socio-political perspective that is rare in mainstream Hindi cinema. There are many reasons why Kai Po Che is one of the most compelling products of the post-renaissance era in Indian cinema. To my mind its greatest achievement is its fusion of 'cinema' and 'history', a synthesis that filmmakers today would consider unpalatable for viewers.

Hence they serve up the junk-food equivalent of cinema. Quickly ingested and easily forgotten. Not this time!


In Kai Po Che the characters and situations created to bring out the personality conflicts emerge from the two crises point in Gujarat's history, the earthquake in 2001 and the post-Godhra carnage in 2002. The sustained palpable tension of the riots towards the concluding lap of this riveting tale is the stuff that great cinema is made of.


Greatness sits lightly on this film. The virtues of the film are many: songs (Amit Trivedi) and background music (Hitesh Sonik) that seem to echo the protagonists' inner-world without making a song and dance, cinematography by Anay Goswami and editing by Deepa Bhatia that say it all without a single shot being redundant, and most of all, a terrific gallery of actors who make the brotherly bonding look so real you feel other celebrated films about male bonding (including Abhishek Kapoor's Rock On) were mere teasers.


And yet to describe Kai Po Che as a film on male bonding would be akin to treating Dr Zhivago as a film on the medical profession. Taking the core idea from Chetan Bhagat's novel Abhishek Kapoor weaves together a tapestry of thoughts, characters and lives that embrace an entire ethos and culture without sacrificing their individuality.


Fearless and almost flawless Kai Po Che bubbles over with the warmth of lived-in experiences and with central performances that are so unstudied you suspect the actors were born to play these parts.


Among the trio of protagonists Amit Sadh as the fence-sitter turned Hindu radical gets into the skin of his character and remains there till the end, and not for the first time. He was also admirable as a narrator-journalist in Kabeer Kaushik's Maximum. Here's an actor who deserves a lot more.


Raj Kumar Yadav as the voice of reason among the trio of friends yet again displays his amazing ability to come to grips with the body language, speech and inner world of the people he plays. I've not seen any actor deliver his lines in recent memory so naturally without artificial punctuations. Raj Kumar's triumph is the triumph of refined acting in Hindi cinema.


And let's not talented the spontaneous Amrita Puri as Ishaan's sister. She is at the periphery of the pivotal axis and yet makes her presence felt with such an endearing lack of vanity.

As for Sushant Singh Rajput, the script favours his character. And he repays the compliment right back, with bonus. With his compelling screen presence and an ability to render restless energy in a restrained pattern, Sushant immediately establishes himself as one of the most articulate actors of the post-Ranbir Kapoor generation. We can say about Sushant that a star is born without the risk of having to eat back our words later on. His relationship with the cricketing prodigy Ali (Digvijay Deshmukh) is in many ways the core issue of the multifarious plot. You cheer for Ishaan's streetwise heroism in a way you haven't cheered in a long while.


Take a bow,Abhishek Kapoor. You have proven that Rock On was no flash in the pan. Kai Po Che takes the theme of friendship to another level. Yeh dost hum nahin todenge, indeed. Sometimes the best of friendships get swept away in politics and history.It takes a master storyteller to remind us that cinema is finally a mirror of forces which have a bearing on life.
Kai Po Che just tempts me to tell the escapist merchants of Bollywood to go fly a kite.