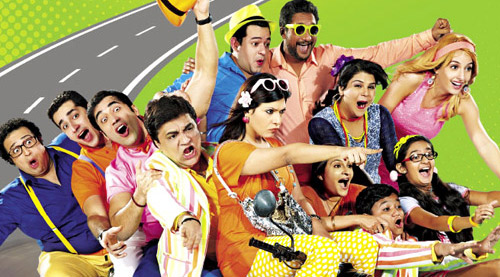 
Crazy Cukkad Family is a comedy desperately in need of genuine laughter. You can't even force yourself to giggle at the sheer asininity of the goings-on. The characters behave stupidly and seem very proud of it. This is how dysfunctional families behave, so who are we to change the rules...they seem to suggest by their exhibitionistic antics.


Some comedies are so frightfully misdirected they appear to be horrors. Crazy Cukkad Family must have sounded hilarious and wacky on paper. In fact I can close my eyes and see the entire cast and crew falling off their collective seats as they read the script.


Alas, there are many a slip between the cup and lip-sync. Characters screaming their lungs off to prove they are part of a dysfunctional family do not necessarily constitute an occasion for humour.


It is truly sad to see talented actors straining to be funny when the material provided to them is pulling the other way. The plot about a dysfunctional family of four unbecoming progenies who wait for their rich father to kick the bucket required much more fleshing out. In the absence of meat to chew on the characters nibble on the edges of their edgy characterizations trying desperately to keep the comic spirit alive. There are brave concessions to new-age values such as a cross-dresser and a son declaring himself to be gay to his family. But the new-age morality is a casual of creative mortality. You really don't care if these characters are gay or fey.


Death as a laughing matter is hard to achieve in Indian cinema. Kundan Shah managed to make mortality worth some mirth in Jaane Bhi Do Yaaron. The feat seems way beyond Ritesh Menon's abilities. He gets some sturdy support from actors who know their jobs. Shilpa Shukla, Ninad Kamat, Kushal Punjabi and specially Swanand Kirkire are in fine form.


Sadly the humour is decidedly more dead in Crazy Cukkad Family than the patriarch who just refuses to die. The writing could have done with less lungs and more brains.


This is one crazy family we don't want to run into.