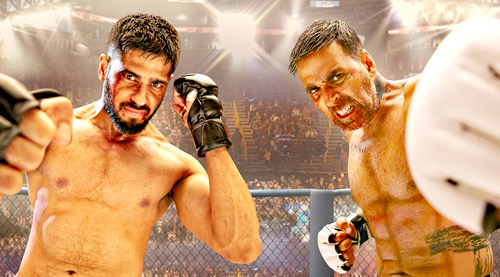 Between Jackie and Jacqueline, this skilfully subverted over-dramatized yet deeply effective remake of the pugilistic drama Warriors, covers quite a lot of ground.

Like it or loath it, you've seen nothing like Brothers in Hindi cinema. Malhotra whose previous film Agneepath dabbled in dread while remaking the Bachchan film, does the same here with the well-known Hollywood drama about a disintegrated family of boxers trying to get their act together.

Jackie Shroff playing the patriarchal pugilist looks suitably devastated by destiny as he grapples with the kind of role that Sharmila Tagore and Shabana Azmi played in Aradhana and Bhavna, of a parent who has crossed all limits of decorum to redeem his family ties.

Shroff wails and moans rants and bellows. He is Shakespearean in his angst and Gulshan Nanda in his demonstrative emotions.

His two warring sons played by Akshay Kumar and Siddharth Malhotra are far more restrained in their resentments. Maybe it's a generation thing. Or maybe it's more to do with the fact that Akshay modulates his emotions to near-perfection. He plays the estranged unforgiving son and the doting father with fabulous fluency lending hurt and warmth to every scene.

Akshay easily lifts this, at times mawkish and over-impassioned film to heights of a graceful sublimity that would otherwise have been denied to the film.

Karan Malhotra divides his storytelling into two sharply segregated halves. In the first half he delineates Jackie Shroff's crumbled world and his feeble attempts to rebuild it. Shroff
and Akshay as the warring father and son nail their parts, giving to their characters and to the film a personality and a heart.

I for one wished to see more of Akshay's relationship with his screen-father.

One of the narrative's gravest errors crops up in the space allotted to the intricate network of relationships. Any character who wishes to be demonstrative about his or her emotions is clocked severely to ensure the emotions do not occupy too much screen time. Shefali Shah playing Jackie's wife gets around 15 minutes to play out Shabana Azmi's entire role in Shekhar Kapoor's Masoom of a wife who must accept her husband's extra-marital child. Shefali crams in the emotions with majestic velocity.

It's only when we reach the second-half that we realize why the emotions are kept under check. The second-half is devoted entirely to the free-style boxing. Bones crunch, teeth are broken, blood spills outâ€¦it is a space not meant for the squeamish. When finally the two brothers fight it out at the end, we see how cleverly the director infuses an emotional back-stroke to his full frontal feast of fury in the ring.Director Karan Malhotra brings both brutality and brotherly bonding into the boxing ring.Just how he pulls it off is a gravity-defying feat best experienced rather than described.

Spreading its wings into a series of bloody bouts the narrative flickers and leaps into the stratosphere of supreme articulation. A lot of the emotions are plainly and unabashedly melodramatic. But there is a fluency and energy to the narrative undeterred by the free flow of blood and guts in the second-half.


Cinematographer Hemant Chaturvedi shoots the characters in dark ebony settings bringing out the passion and the angst in dingy unglamorous colours. Barring a nonsensical item song by Kareena Kapoor, Brothers steers clear of all humbug focusing on the Catholic family's crucified hopes and desires, never watching them squirm in stereotypical roles. Yes, these Catholics wear crucifixes and speak in the mangta-hai tones. But they never over-do the ethnicity, never play up the marginalized card.

Whatever the flaws in the narrative (and there are several glaring omissions in the narrative where sustained emotional energy is sacrificed for celerity) they are all ironed out by Akshay Kumar's finely-naunced performance. This year he has evolved as the finest contemporary star-actor we have. Jacqueline in a limited role gives her finest emotive shot to one scene with her screen father-in-law Jackie Shroff.

Brothers may not appeal to those who look for laughter in times of despair. There is barely room for a whiff of a smile in this dark sanguinary and seductive tale of destruction and redemption told in a free-wheeling style that accommodates derivations and innovations without apology or awkwardness.