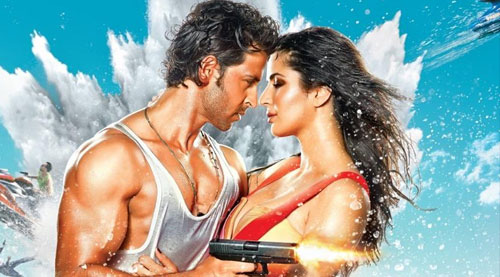 
Yup, one major action sequence featuring Hrithik and Katrina, the Golden Couple on the run (gee, what fun!) is set in a pizza shop. In fact, this particular chain seems to be very good at delivering their goods, considering Danny Denzongpa, playing an international kingpin, is seen nibbling the same pizza brand at the start of the film.


Wish we could see the same zeal for delivering the goods in the direction of the film. In one word Bang Bang is pointless. In two words it is annoyingly pointless, with Hrithik Roshan cast as a double and triple agent with a fake version of what this week's other release describes as chutzpah.


Katrina Kaif plays the kind of vexatious dreamer who would allow a renowned criminal to convince her that she should abandon her boring life for some supposedly cool hi-adventure. And hi-adventure in Bang Bang means somersaulting cars, vertiginous jumps from heights and Hrithik trying to pass off water sports as stunts performed to save the world from catastrophe.


None of this is as exciting for us to watch as it is for Katrina to do through. She is having fun the way other boring girls in our films do when they meet the unpredictable adventurous hero. Check out Deepika Padukone in Yeh Jawani Hai Deewani. The difference between Padukone's and Kaif's awakening is palpable. You see the first girl transform in front of your eyes. Here, you only see the girl prancing like a kindergarten to get attention.

Where is the plot to suggest there is a simmering chemistry between Katrina and Hrithik ready to erupt in the midst of all the blazing guns and screeching cars? Somewhere tucked away in this glamorous mess, there must be a plot that you are expected to spend a good 2.5 hours searching for. All we see is a cocky Hrithik Roshan infusing an extra dose of bravado into his jewel-thief hero's role. This is Hrithik's loudest performance since Sooraj Barjatya's Main Prem Ki Deewani Hoon.


But we are digressing. Bang Bang is not about the finer points of the cinematic expression. For that check out this week's other release Haider. Bang Bang is about smooth surfaces, beautiful faces, well-toned bodies and locations that are chosen for no rhyme or reason except to beat the next Big Bollywood Blockbuster from getting there.


It's not just the finances that are squandered in making the film look scenically adventurous (maybe to hide the bottomless pit of nothingness that such bang-bang actioners aim for). The criminal wastage of acting talent makes you wish there were laws preventing actors like Pavan Malhotra, Vikram Gokhale, Ankur Vikal, Danny Denzongpa, Kanwaljeet and Deepti Naval from signing on for these films that presumably pay well.


The best performances come from two actors in cameo parts playing waiters in two different restaurant scenes, one of them in the aforementioned Pizza Hut sequence. The other is in a classy eatery where Hrithik cocks his eyebrow knowledgeably and identifies the red wine as foreign, only to be politely snubbed by the waiter who says it's local wine.

The above little scene sums up the wannabe spirit of Bang Bang. It aims to be a clever slick remake of the Tom Cruise starrer Knight & Day .It ends up borrowing all the absurdities from the original and burying them under tons of idiotic posturing by a leading man who should've known better and a leading lady who is happy speaking her Hindi lines with a British accent.


Despite the enormous resources Bang Bang doesn't seem to get it right. The action is motivated by an urge to impress rather than as a part of the plot. The stunts are shot in the spirit of item songs and strewn across the narrative with scarcely any room for the characters to breathe.


Director Siddharth Anand takes the Tom Cruise original out of its naturally stupid habitat and makes it look spruced up. But where is the face behind the farce?


Bang Bang gets the boredom quotient bang-on. The rest is all noise and fury about a diamond, Kohinoor no less, stolen from a British museum. The way the thief carries the precious 'diamond' (which looks like a paperweight) around in his pocket goes to show how little a certain group of filmmakers respect the audiences' intellect.


They think Hrithik Roshan dancing, singing, fighting and taking off his shirt amounts to entertainment. Little do they know.