She created furor with her sizzling number ‘Dilbar’ in Satyameva Jayate! While Nora Fatehi went on to be compared to Sushmita Sen who originally featured in the 90s track, the actress is all set to woo the audience yet again. This time it will be in the Rajkummar Rao, Shraddha Kapoor starrer Stree in the song ‘Kamariya’! 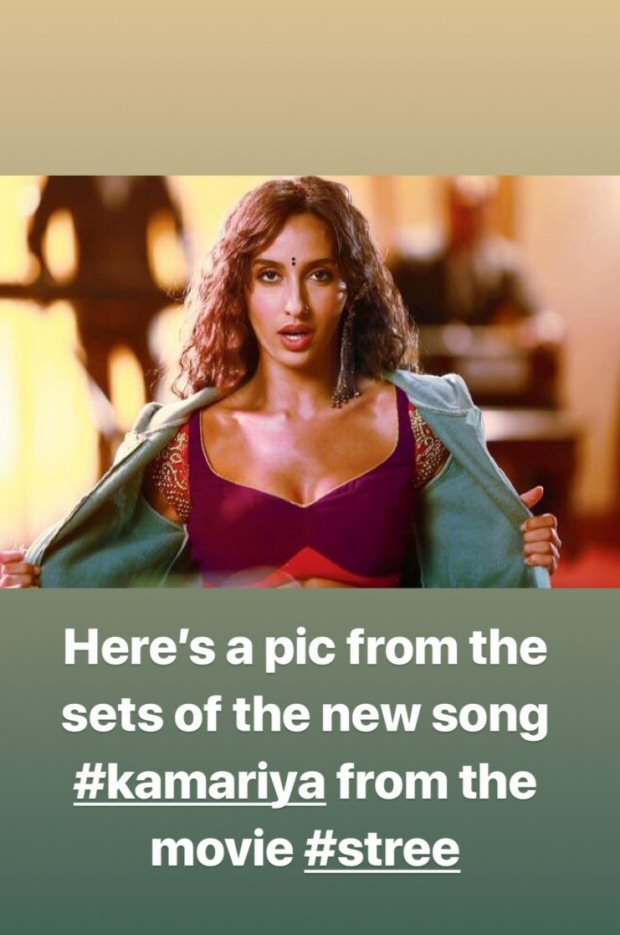 Nora Fatehi will be doing yet another special number in this one of a kind horror comedy Stree. The song titled ‘Kamariya’, as described by the actress in reports, has a rustic feel to it. The actress also revealed that she will be featuring in the song in a saree and sneakers are something she loved! She will also be sporting unkempt hair in this number. Giving a glimpse of her look from the said Stree number, the actress posted the picture as her Instagram story!

Besides Nora, the song will also feature Stree’s leading man Rajkummar Rao and also, Aparshakti Khurana and Abhishek Banerjee. The two play the role of Rao’s friends in the film. The actress also described that the shoot for the song was definitely fun since shooting with the guys was a breeze. Despite the difficult steps, the actress expressed her enjoyment over filming the track.

On the other hand, speaking of the film, Stree is directed by Amar Kaushik. The music is composed by Sachin-Jigar. The film is produced by Dinesh Vijan along with Raj Nidimoru and Krishna DK. It is slated to release on August 31.

Also Read: Nora Fatehi joins Salman Khan’s Bharat and this is the role she will be playing!