Anushka Sharma has been spending time in London with hubby Virat Kohli. The actress, who is all set to start promotions for his next film Sui Dhaaga – Made in India, recently accompanied Indian Cricket Team at the High Commission of India in London. While it is an honour for Team India, this did not sit well with the Indian fans. BCCI has been receiving a lot of flak for including Anushka in the Team India picture. 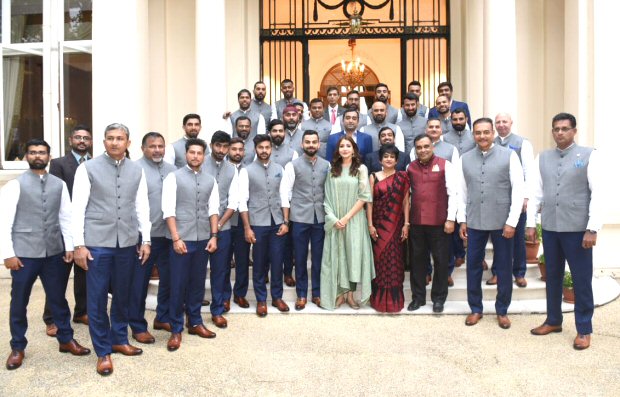 Anushka Sharma, who is married to Indian Cricket Team Captain Virat Kohli, is the only relative in the picture. She can be seen standing in the middle of the picture with Virat. This picture came after BCCI, reportedly, set a new rule that wives, relatives and girlfriends of the cricketers won’t be allowed in the camp until the end of the three Test matches against England. After this picture, the actress and BCCI are receiving backlash.

Vice captain is in last row and First Lady of Indian cricket is in front row. These people giving lecture online few days back. @AnushkaSharma

Why @BCCI allows someones wife at official tour.... Please confirm Is your team mens are at work or on honeymoon

Why is Anushka here lmao?
She is at the center while the vice captain is at the end lol whatta joke

No Hard feelings but I heard recently BCCI denied players from having their wives around when on tour in England. WTH is Anushka doing among Indian team?? Rules are meant for Team and captain should lead from front in every aspect. Just saying

Bhai Kumar, those are their personal accounts. They are free to do whatever the want. This is official BCCI account. And that photo ideally represents Indian Cricket Team and not their WAGs. That's what @ambade_akash is trying to say.

Also Read: Sui Dhaaga: The logo of the Varun Dhawan, Anushka Sharma starrer is made in 15 different art forms