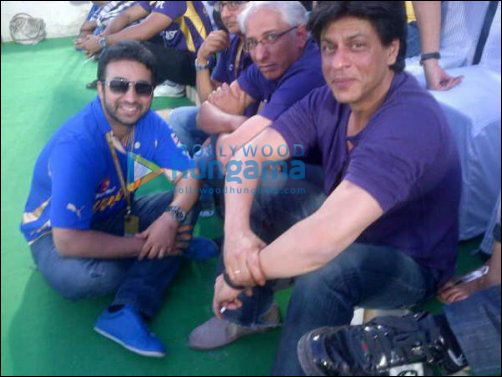 The 5th Season of Indian Premier League (IPL) has begun in full swing with players from all over the world battling it out for their respective franchises.

Last Sunday, saw the all important clash between Rajasthan Royals (RR) and Kolkata Knight Riders (KKR) at Jaipur. Team owners Raj Kundra and Shah Rukh Khan were busy cheering their own teams but did find some time in between to bond and catch up on old times. Raj's better half Shilpa Shetty (who incidentally debuted opposite SRK in Baazigar) was missing as she is on maternity leave.

While Raj and SRK did enjoy a few laughs together, in the end it was Kundra who had the last laugh as his team emerged victorious beating King Khan's team KKR. King Khan would be hoping for a change in his team's fortunes sooner than later.