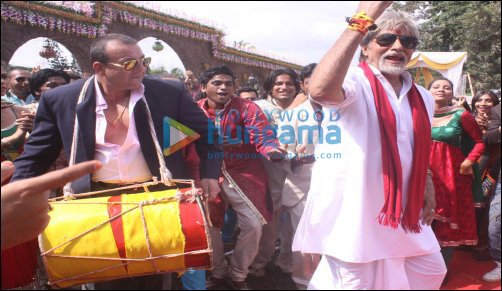 What can be more deadly than heaven and earth colliding? Well, there's something more deadly than that. And it's the coming together of the two titans of the tinsel town, viz., Amitabh Bachchan and Sanjay Dutt in the film Department, which is being directed by the maverick Ram Gopal Varma. Not that the duo of Big B and Dutt have not shared the screen space anytime before, but this film is really special as it has the two not just sharing the screen space, but also has Big B dancing to the deadly Dutt's tunes.

The adjoining image has been taken from a song where Amitabh Bachchan is dancing with abandon to Sanjay Dutt playing the dholak on the streets of Mumbai. The duo perform as part of the baraat for a special wedding song 'Kammo' and will be seen dancing in full street style like in a typical desi shaadi.

Besides Amitabh Bachchan and Sanjay Dutt, Department also stars Rana Daggubati and is slated for release on May 18, 2012.