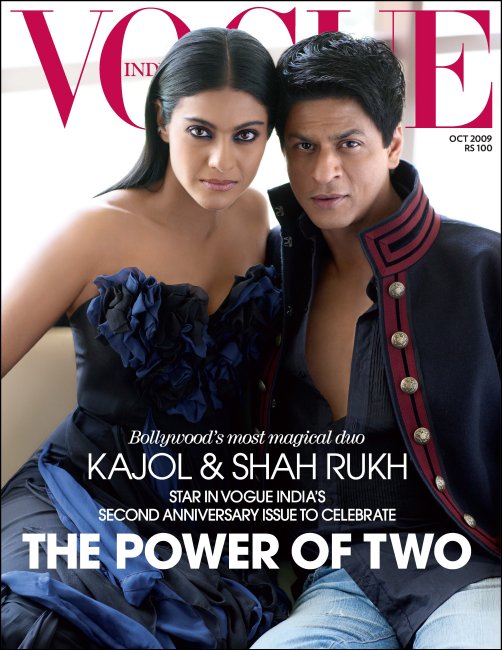 Continuing Bollywood's traditional famous line 'Ek se bhale do', the latest edition of Vogue has given (read 'gifted') the readers with not one, but two of India's biggest superstars: Shah Rukh Khan and Kajol on the cover! For starters, it is this pair who will be seen in My Name Is Khan, one of the most-awaited films currently. And nothing could be twice more exciting than having these two torchbearers of the silver screen, on the cover page of the second anniversary special issue of Vogue! And the man leading the path is none other than the ace director Karan Johar, who not only reunites the stars in his new film but also talks to them exclusively for Vogue about what it is like to have the Midas touch.

Needless to say that, if the cover of this issue is any indication of what to expect inside, the readers are bound to celebrate Diwali much before its arrival, add to it, some amazing photographs of the two superstars! Talking about this pairing, Priya Tanna (Editor Vogue India) says, "Vogue is a year older and what better way to convey the 'Power of Two' theme that runs through (and electrifies) this issue than by bringing together Bollywood's ultimate pairing, Shah Rukh Khan and Kajol. His legendary charisma first met her quirky effervescence in 1995 on a Eurorail in Dilwale Dulhania Le Jayenge and the entire nation fell in love. Karan wore an interviewer's hat for Vogue, deconstructing the chemistry behind their magic."

We just couldn't argue on that! Simply bring on the October issue of Vogue folks pronto!