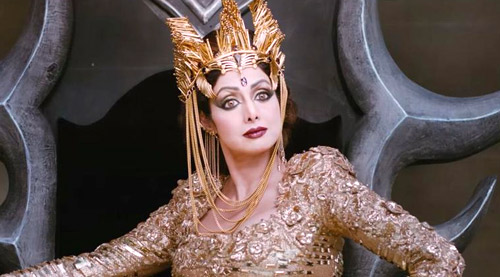 Three years after her much loved English Vinglish, Sridevi would be returning to the big screen with fantasy costume drama Puli. Now the buzz in the town is that the South film, which is also being released in Hindi, could well turn out to be a Bahubali moment for her.

"After the 100 crore success of Bahubali, suddenly the doors have opened much wider for South films to see a bigger and better release in Hindi," informs a trade observer, "Though majority of big films from down South do get a same-day release in other parts of the country as well, it is more or less token at the best. There are select theaters in Mumbai and Delhi which have a market for Tamil and Telugu films which do hold a South release for 2-3 weeks. However, when it comes to dubbed releases, they are far and few unless it is a Rajinikanth film. Now after Bahubali, there is a new market that has opened."

For Puli (which means Tiger) that has South superstar Vijay as the male lead (and in a double role), all eyes are now on how the film is positioned across the rest of the country.

"Sridevi, who plays the queen in this film set hundreds of years ago, is a key protagonist in the film and if the promo is any indication, she is back in a super gorgeous avtar. She instantly reminds of the youthful self that was on display in Salman Khan starrer Chandramukhi [1993] which was released a couple of decades ago. It would be a treat to watch her in a costume drama all over again," a filmmaker adds.

However for that, all eyes are on how big and wide release does Puli get.

"Bahubali benefitted supremely from the fact that it had Karan Johar taking care of the all India presentation in Hindi. He ensured that the marketing and promotion was huge and though the opening was still decent to good, it was the vision of S.S. Rajamouli that made Bahubali the Blockbuster that it is in Hindi as well," the trade observer adds, "For Puli to do that, first and foremost its release would have to be really good. For it to make an impression, it can't just rely on a token release and then expect a good word of mouth to pull it though. It has to be pitched on almost the same scale as a good Hindi biggie."

Considering the fact that Sridevi is anyways being missed on the big screen for three years now, it won't be a bad idea after all.