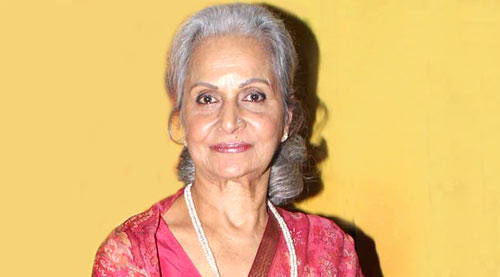 After 6 years, the timeless Waheeda Rehman has said yes to another film.
And that too, because director Aparna Sen wouldn't take a no for an answer.

Says Waheedaji softly, "I haven't been doing films lately. It's only because Rakeysh Mehra was keen that I decided to do Rang de Basanti and then Delhi 6. I've known Aparna for many years. We worked together in her film 15 Park Avenue which was in English. When she offered me Arshinagar, Aparna's interpretation of Romeo & Juliet, my first instinct was to say no. 'What would I do in the film and to come and shoot all the way in Kolkata and too that for a film in Bengali when I can't speak the language? Dil nahin karta.' But Aparna insisited. She said it's a short but very relevant role and she felt I was right for it."

It is the role of a Muslim matriarch in a conservative family. "I play the daadi of the family. What I liked about my character was the change in attitude that she undergoes over time. When her son wants to marry a Hindu girl she completely opposes the match saying, 'Bilkul nahin iss ghar mein Hindu ladki nahin aa sakti.'

But when her granddaughter wants to marry a Hindu boy, she relents and urges the family to agree to the match. What I like about my character is that she grows wiser with time and understands the important of adapting one's principles to the changing times. Waqt ke saath badalna padta hai."

As for the Bengali dialogues, Waheedaji shyly reveals that Aparna found a way to get around that as well. "She told me it's a Muslim family in Kolkata, so my Bengali needn't be fluent. Tooti-phuti Bangla se kaam chal jayegi.
Laughs the ethereal beauty. "It's strange, but directors have always shown more confidence in my abilities than I have in myself. Whether it was Guru Duttji, Sunil Duttji, now Aparna...they've all come back to me with more film offers. So, somewhere I feel I must be doing something right in front of the camera."