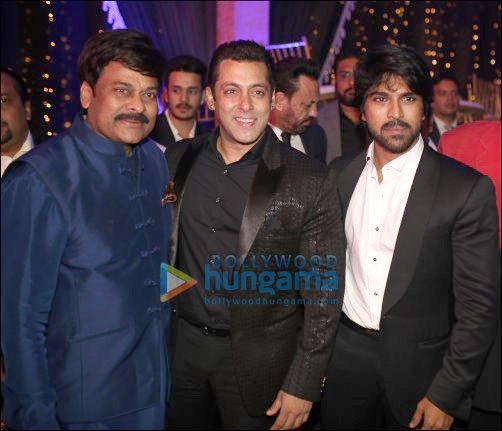 One of the most popular stars of South, Chiranjeevi recently had a lavish bash to celebrate his 60th birthday and many renowned Bollywood celebrities were a part of it. Amidst many superstars, Salman Khan too graced the event.


The two actors not only were thrilled to see each other but were seen exchanging a warm hug. Salman Khan who fondly calls Chiranjeevi as 'Chiru garu' knows the actor for years and the two share a deep bonding. In fact, Salman Khan recently mentioned that Chiranjeevi is an on screen superstar because he is a rockstar in real life too. The actor was all praises for the South superstar stating that he is an honest man with a clean heart and is a complete family man.

Interestingly, Salman Khan played the lead in Jai Ho, which is a remake of Chiranjeevi's blockbuster film Stalin.


The other guests who were a part of the bash include Abhishek Bachchan, Jaya Bachchan, Suriya, Venkatesh, Nagarjuna, Vivek Oberoi, Prakash Raj, Salman Khan, Sridevi Kapoor, and Boney Kapoor among others.