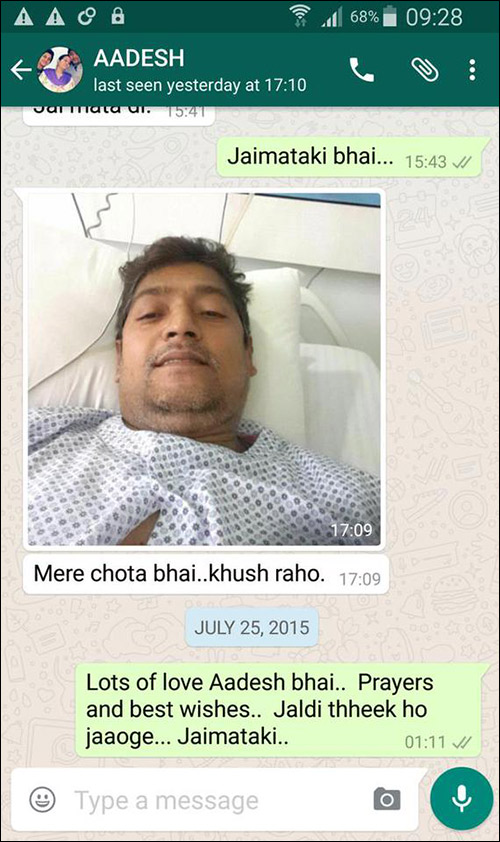 This week, the music industry suffered a great setback after one of the renowned composers Aadesh Shrivastav passed away. The music composer breathed his last after battling with cancer leaving behind his wife and two teenage sons. Recently, his friend and colleague Sonu Nigam not only reminisced about the days he worked with the musician but also shared his last memory with him.


Posting Aadesh Shrivastav's last selfie, which the music composer had apparently sent to Sonu Nigam during a chat conversation, Sonu Nigam also shared a series of tweets on the micro blogging site. He said, "I know you know Aadesh bhai left us finally after a very brave battle against the dreaded disease. He was one of my closest friends and we have done some remarkable work together. Beyond all that, we would hit it like a house on fire. We have laughed like no one's business since we shared a common sense of humour... It's hard to believe that he won't be there anymore. I remember how he sent me his picture from hospital when he had his relapse this time.. Underneath was written, "Mere Chhota bhaai, love you". He was so full of life, i have yet to see another man who has his traits. My heart wrenches in grief for having lost a friend, a brother. I also look deep inside myself today, even more than I ever did, to see where is it that everyone goes from the inside hidden secret path... for there certainly resides the Absolute One. Rip #AadeshShrivastava."