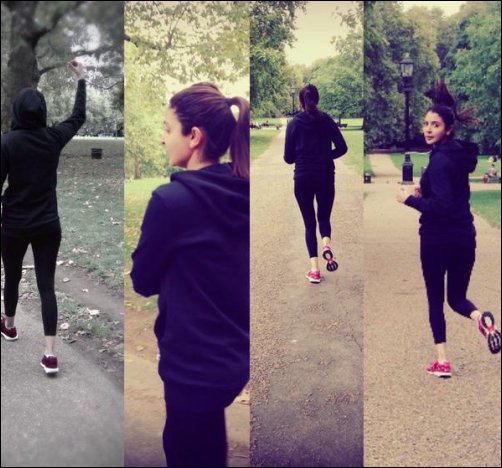 Readers may be aware that Karan Johar, after quitting the dance reality show 'Jhalak Dikhla Jaa', is now in London for directing his upcoming film Ae Dil Hai Mushkil starring Ranbir Kapoor, Aishwarya Rai Bachchan and Anushka Sharma in the lead. It seems that Anushka Sharma has already started prepping for her role in full swing and her manager recently posted a picture of the actress on the micro blogging site.


The picture has Anushka Sharma sweating it out at a joggers park in London and her manager further tweeted, "Ready..steady..GO ! @AeDilHaiMushkil #getset #london". As a reply to this tweet, Anushka said, "Hahahahah STALKER !! @ritikanagpal".


Further, Anushka Sharma expressed her excitement about being a part of this film and said, "Sooo today we start filming #AeDilHaiMushkil in london. Butterflies attacking. Excitement rolling.Send me your love & wish me luck guys!!"


Produced under the banner Dharma Productions, Ae Dil Hai Mushkil is slated to release in October 2016.