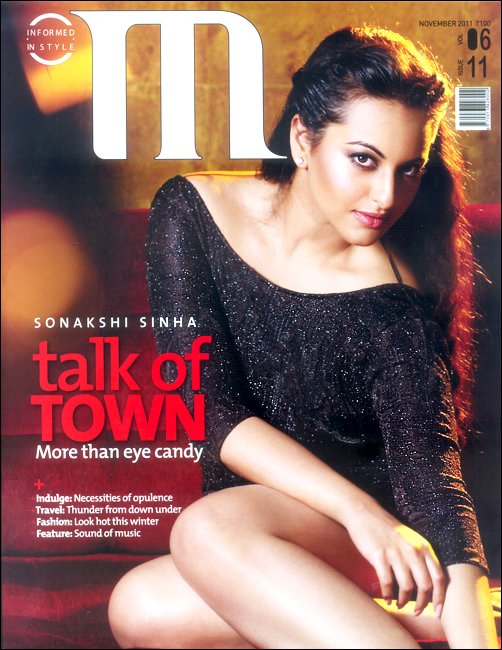 If you thought that Sonakshi Sinha is someone who was a mere runaway success with her debut film Dabangg, then you better think again, for she is just not an actress by fluke, something that's complemented by the fact that she is the cover girl of the latest edition of M magazine.

Must say that she looks a million dollars, not just on the cover, but also in the inside pictures. Talking about her humble beginnings, she says that, "I never thought that I'd be an actor. Whenever I met Salman, he would lecture me for hours to lose weight. He said he had something in store for me. Slowly, I got myself to lose those extra 30 kilos and one day Salman came home alongwith Arbaaz and narrated the script of Dabangg. Both Ma and Papa were with me and it was a mutual decision to take it up." She also adds that, "It makes me wonder whether people have better things to do or not. I am an actor and it would be wiser to concentrate on my acting. It's about time people started to realize that everybody is different. If I am not a size zero, there is nothing wrong with that. I am being accepted for the way I look in my first film".

When asked about her childhood and upbringing, she says, "It's my personal decision and the values I have been brought up with. My father comes from a small conservative family in Patna. Moreover, I don't think it's required. What's the point in doing something you are not comfortable with? In my case, being different has obviously paid off. When everyone else was in mini skirts and bikinis, I came in a saree and ghagra choli."

All in all, an issue that's really worth its salt, courtesy, Sonakshi Sinha!

SUPERM members look breathtaking on the…

SUPERM look fierce in the power-packed…

Sonakshi Sinha talks about staying away from…