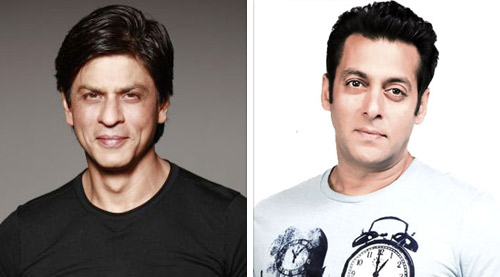 Salman Khan tweeted the teaser look of Shah Rukh Khan's Raees, and created a storm. It's not just that he was returning the favour to King Khan for tweeting the first look of Bajrangi Bhaijaan. He was asking the world to see the teaser of the film that was going to clash with his, Sultan.

It's been billed as the biggest clash of the century- Two of India's brightest and biggest powerhouse performers, who match head to head, toe to toe, are getting set to take the battle to the cleaners next Eid. Its SRK vs Salman; YRF vs Excel and Red Chillies and Raees vs Sultan.

Trade pundits, fans and media are already waiting in anticipation to see just how is this clash going to test the strength of Box Office, but what if, just what if, the two Khans decide to turn the competition on its head. What if they decide to run the entire marketing campaign leading each other's films.

Imagine- Shah Rukh launching the trailer of Sultan at a massive media event or among the fans of Salman at Gaeity and Salman going all the way to Gujarat to introduce Raees!

The biggest takeaways of this will be: It will be the most positive campaign ever. The idea of a fight will evaporate. The capacity of Box Office of Raees and Sultan put together, powered by such a kind of radical marketing campaign, will go through the roof and such a move will be a perfect tribute to the idea of Eid-celebrating the festival of togetherness, brotherhood. Fans are bound to watch both the films- one of their hero and of the other Khan, as a mark of respect and love. The release will become the biggest media event of the year- dwarfing everything- across the spectrum be it politics or sports.

However, the biggest pitfall of such an idea will be logistics and showcasing. Just how will such an idea be executed- how will the media plans be made without affecting each other and what about the targets set by the film houses backing the projects- What would be the parameters to judge the prowess of the marketing teams of the Studios especially since the risks are bound to be high because of the money that will ride on both the films. On the Exhibition side, how the screens and shows would be divided will be critical since that is where things boil down to!

Traditionally box office clashes have been between unequal partners, where often the better film has won the day, but a clash of this size, which reminds us of what happened during Son of Sardaar and Jab Tak Hai Jaan.

Such a move just isn't in the interest of the industry because it carries the capacity to create deep fault lines- due to the sheer power of the two superstars. And when it comes to Numbers-Can Box Office first day figures of Sultan and Raees combined on Eid, carry the capacity of posting a figure northwards of 60- 80 Cr Nett and follow with combined Saturday-Sunday collections of 120-150 Cr, to take the total of two films well beyond the 100-120 Cr mark individually?

Let the experts' debate, argue and decide, even as fans wait to see if the two films will be led together by two of India's most loved stars!

Only Khans, can do it!