Sanju is all set to release on June 29th and the makers are leaving no stone unturned to make sure that the film is well received by the audience. The interest is already piqued because first of all, Ranbir has a massive fan following and secondly, the story itself is extremely exciting filled with thrill, drama, emotion, mystery and intrigue. Though real, it is stranger than fiction and director Rajkumar Hirani has made sure that the reality of Sanjay Dutt’s controversial life is depicted well. In the movie, he has primarily explored a father son angle between Sanjay and Sunil Dutt. Paresh Rawal is playing Sunil and on the occasion of Father’s Day yesterday, he shared a special clip from the film which perfectly shows the beautiful bond between Sanju and Sunil. It is on the sets of Munnabhai MBBS where Sunil played Sanju’s on-screen dad and their on-screen chemistry was very relatable to both because they shared a similar dynamic personally. 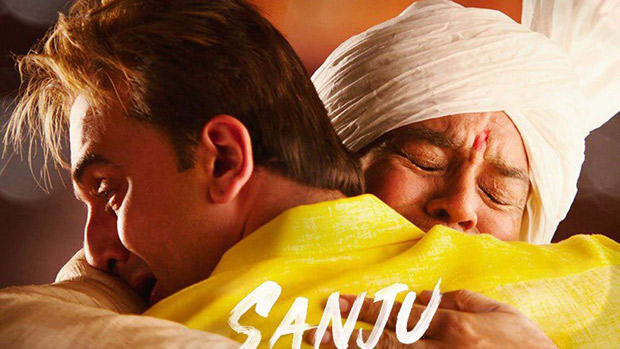 The clip starts with Ranbir’s voiceover depicting his story as Sanjay Dutt. He wrote, “Good evening, ladies and gentleman. Aaj mein bohot mushkil kaam karne ja raha hoon. Dad ko thank you bolne ka kaam. Pehle kabhi bol nahi paya kyonki shabd hi nahi mile. Jo unhone mere liye kiya hai na, uske liye har shabd chota lagta hai." (I am going to do a difficult task today. Telling my father thank you. I could not do it before because I did not have words. I have no words to describe what he has done for me all this time).” The two share a hug and an emotional moment is created right there.

#Sanju is a celebration of the special bond between a father and his son. Watch an exclusive father-son moment from the film. Releasing 29th June.#JaaduKiJhappi @rajkumarhirani @VVCFilms #RajkumarHiraniFilms #FathersDay pic.twitter.com/MMrlFDiNOk

Ranbir Kapoor is currently working on Brahmastra with Ayan Mukerji and Alia Bhatt. Next up, he has signed a movie with Yash Raj Film. The movie is titled Shamshera and has Sanjay Dutt in a villainous role opposite Ranbir Kapoor.

Also Read: Here’s how Sanjay Dutt received an AK-56 rifle in the name of ‘guitars and tennis balls’