It hasn’t been an easy life for Sanjay Dutt. Bollywood's 'Baba' has had a pretty rollercoaster life with serious and drastic ups and down. One of the biggest tragedies struck when Sanjay Dutt's mom, veteran actress Nargis Dutt, passed away due to pancreatic cancer when he was only 22 years old. She died four days before the premiere of her son's Bollywood debut film Rocky in the year 1981. Since then, the actor turned to drugs and alcohol and the rest of his life is just a history. 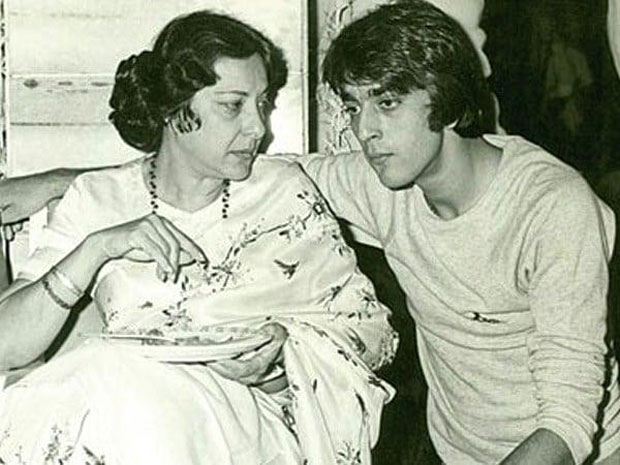 On veteran actress Nargis' 37th death anniversary on May 3, Sanjay Dutt took to his Instagram to remember his mother. With an old picture, the actor got nostalgic. This seemed like it was from the early times when late actor Sunil Dutt was prepping his son Sanjay Dutt for the big Bollywood break. In the black and white candid picture, Sanjay is seated beside his mom while she is having food. He captioned the image, "All that I am is because of you. I miss you!"

It is known that Sanjay Dutt and his life will be told on the big screen by Munna Bhai MBBS director Rajkumar Hirani. The film has been titled Sanju, which was a nickname given to him by his mom, Nargis Dutt. Ranbir Kapoor is essaying the role of Bollywood's bad boy. Slated to release on June 29, the film will narrate the story of Sanjay Dutt from his early days to Rocky, from his drug addiction to rehab days, from jail time to present.

Meanwhile, Sanjay Dutt has an array of projects in the pipeline. The actor made his comeback with Omung Kumar's Bhoomi alongside Aditi Rao Hydari. He will be seen in Saheb Biwi Aur Gangster 3 with Soha Ali Khan, Jimmy Sheirgill and others. He is currently filming Torbaaz which also stars Nargis Fakhri. The period drama Panipat, helmed by Ashutosh Gowarikar, will star Arjun Kapoor and Kriti Sanon. Besides this, he is starring in another period drama titled Kalank. The film stars an ensemble cast of Varun Dhawan, Alia Bhatt, Aditya Roy Kapur, Sonakshi Sinha and Madhuri Dixit.