It is a known fact that Salman Khan is currently in Ladakh shooting for a major schedule of Race 3. His Eid release is just over a month away from its release. Amidst the hectic shoot commitments, when Salman Khan came across his Sultan co-star Amit Sadh, he was thrilled to have him around.

In fact, knowing the generous heart of Salman Khan, it was not surprising to see the superstar warmly welcome his friend. Amit Sadh, on the other hand, too was equally enthralled to meet Khan. The two even clicked a picture together in their biking gear. Both being bike enthusiasts, we hear, that the duo zoomed around the rounds of Ladakh exploring the picturesque mountains and scenery around. 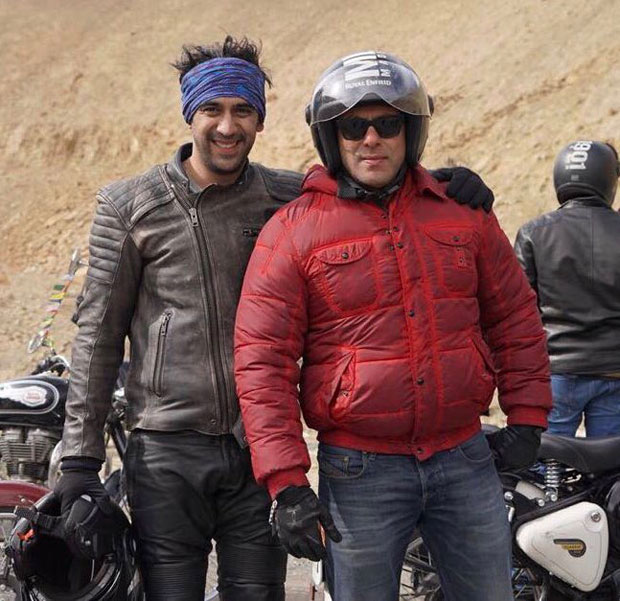 Also, Amit Sadh, who is was more than happy to share his bike love with the superstar, took to social media to speak on the experience. He posted on his Twitter handle about how his wish was fulfilled after riding with Salman Khan. His said tweet read, “Best ride of my life, with the bestest guy I know! Thank you @BeingSalmanKhan Sir, for fulfilling yet another wish of mine, to ride with you! #SultaanSahab.”

While it was great to see a Sultan reunion there, there are media reports speculating about Amit Sadh doing a special appearance in Race 3. However, neither the makers nor Amit have made any official statement on the matter.

As for the film Race 3, it was supposed to wrap up its last leg in South Africa. However, owing to the imprisonment sentence of Salman Khan, the team had to be shifted to Ladakh. Considering that the actor is out on bail currently, the court has ordered him to refrain from flying out of the country for the time being.