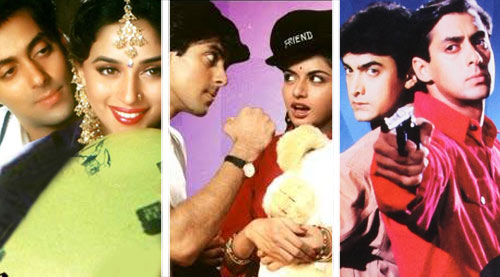 (Continued from Part I)


This was when Sooraj Barjatya came to Salman's rescue all over again. The team, with inclusion of Madhuri Dixit, was in full fervor all over again as something magical was created in Hum Aapke

Hain Kaun which stays on to be popular even decade and a half after its release. The marketing and release model of this film, termed as an extended family music video by many a critic, was the

same as Maine Pyaar Kiya. It was released only on a dozen odd prints across the country but went on to be an all-time blockbuster at the box office.

Salman Khan impressed one and all with his endearing performance and it was hard to believe that he was the same lover boy who was just not in his elements in last half a dozen films. This was the

time period when one could truly claim that 'he was back in form' and from here began a golden phase which was to be interrupted only after a decade. But more about that later.

Meanwhile, he also had Andaz Apna Apna to his credit in which many believe that he stole the show from Aamir Khan as well. The film was loved by those who saw but a delay in its making

coupled with poor release and marketing meant that this laugh riot went completely unnoticed. Ironically, the film is hailed as a classic today and is THE most popular film of Salman on home video

Action proves to be a savior


Just like after Maine Pyaar Kiya, Salman didn't go on a rampage signing romcoms, he did the same after Hum Aapke Hain Kaun as well by going slow on family films. He tried different

genres at this point but the results didn't go in his favor. Chaand Ka Tukda, Sangdil Sanam and Yeh Majhdaar were all colossal failures and this is when action came to his rescue.

His Karan Arjun proved to be a blockbuster at the box office and opened new avenues for him. His un-stated anger was there for all to see and his no-nonsense act was loved by many out there

who hailed him as a born-again superstar even as Shah Rukh Khan enjoyed his own share of accolades from a film which he admittedly didn't enjoy doing.

Coming back to Salman, his first attempt to sell a movie on the basis of his bare body, Veergati, didn't quite get favorable results and just about passed muster. He was clearly the distant

second lead in Sunny Deol's Jeet and though the film was a super success, it was all credited to Deol's howls, cries and the most remembered 'dance step of the century' in Yaara O

Yaara. There was more action that followed in Auzaar but despite its slick production values, it didn't find many takers.


Salman Khan was continuing to reinvent himself as a complete hero with every passing year, something that was seen in Judwaa where he gave a different meaning to comedy. He was a riot

playing a double role in this David Dhawan flick. Teaming up with the director (who till then had given many a hit with Govinda) for the first time, he went on to form a 'jodi' with him in half a

dozen other comic outings, most of which were successful at the box office. They went on to work together in Biwi No. 1 (super hit), Dulhan Hum Le Jayenge (hit), Chal Mere Bhai

All in the family


Meanwhile Salman Khan also played the central protagonist in an all-family affair Pyaar Kiya To Darna Kya which was a big success at the box office. Produced and directed by Sohail Khan with

Arbaaz Khan in a strong character role, Pyaar Kiya To Darna Kya was a film which was picked up across all age groups, hence bringing him closer to the family audience. However, he didn't

enjoy similar success in half a dozen odd other films that he did with Sohail.

Sohail Khan directed him in Auzaar as well as Hello Brother but both were flops at the box office. Salman also acted with him in God Tussi Great Ho, Main Aurr Mrs Khanna and

Veer - all of which flopped at the box office. Even in other films where they didn't really share screen space together - Heroes, Hello and Salaam-E-Ishq - didn't have much

cheers coming their way. The only exception has been Maine Pyaar Kyun Kiya and Lucky - No Time For Love, both of which have been Sohail Khan's productions.

On the other hand, Arbaaz Khan has been more fortunate with a home run in their very first association together, Dabangg, but more about that later.

(To be continued in Part III)