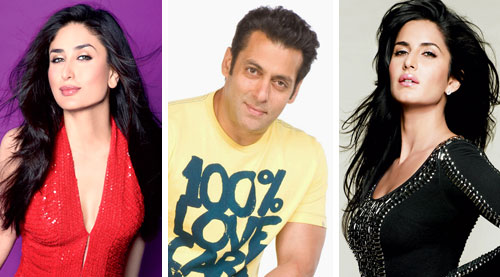 It was three years back when Salman Khan and Katrina Kaif had come together in Ek Tha Tiger (2012). The 'jodi' had sizzled in a big way and the film had turned out to be

their biggest box office success till then. Post that, Salman Khan continued to deliver successes in Dabangg 2, Jai Ho and Kick which ranged from very good to moderate to excellent

respectively. However, one thing that was common to each of these films was a relative newcomer for the leading lady.

Dabangg 2 featured Sonakshi Sinha who, till then, was continuing to deliver good success and had the advantage of coming after Dabangg which was her launch pad. She had a substantial

role in Dabangg 2 as well. However, she was a star, not a superstar heroine, like a Katrina Kaif or a Kareena Kapoor. For Jai Ho, which didn't have any notable role for its leading

lady except for bringing in some comic relief, Salman Khan chose to give break to a complete newcomer, Daisy Shah. Despite her decent act (which was based on Rani Mukherji's style and mannerisms),

many wondered if Salman could well have roped in a known name.

As for Kick, the film actually benefitted its leading lady Jacqueline Fernandez the most to enter the big league. The Sri Lankan beauty herself admitted that Kick was one chance that

she was clinging on most and she had to deliver by all means. She did, and that too in a big way (remember 'Jumme Ki Raat'?) and today is getting some of the best offers. As for Salman Khan,

he had a beautiful young woman alongside him but could well have been in a more advantageous position had a Katrina or a Kareena or a Deepika or a Priyanka came alongside him.

This is what makes Bajrangi Bhaijaan special as with the entry of Kareena Kapoor Khan in the film, the sheer differentiation of a young woman from a girl is speaking up for itself. For a

film which looks as 'desi' and rooted as it can be, especially for a Salman Khan starrer, the need of the hour was to have a dependable leading lady opposite him who brought with her a huge fan-

base of her own. Since Kareena too has gone selective in picking her films, a nod of approval to Bajrangi Bhaijaan only makes the whole project further credible.

Also, Kabir Khan has ensured that from Katrina Kaif (New York, Ek Tha Tiger, Phantom) to Kareena Kapoor Khan (Bajrangi Bhaijaan), he doesn't compromise on the star quotient that his

female lead bring, despite a Superstar at the helm of affairs when it comes to his male central protagonist.

With Katrina, he has made sure each time around that his films are not just a one-man show (even Phantom has Katrina playing an integral part alongside Saif Ali Khan). Now with Kareena, he

is not expected to do anything lesser.