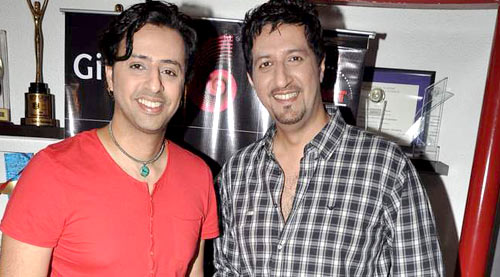 Music Director Salim Merchant of the Salim-Sulaiman duo is literally on Cloud Nine after the stupendous success of the Salim Sulaiman Live 2014 concert tour held in November 2014 in North America and Canada. The success of this concert tour is all the more special for the composer duo since it raised a lot of funds for charity.

In a freewheeling chat, Salim Merchant talks more about the various merits and recognition that came their way during this tour and also gives us a first-hand account of the fans' response to them. Excerpts from the interview:

Right from being white-hatted by the Calgary Mayor to being honored with the Congregational Certificate of Merit from the Governor's office in New York to even getting a day named after you and of course the love of the fans, this tour surely has been a huge success for you in every which way, isn't it?

It was really full of incredible and prestigious moments and we feel quite satisfied with the response. The highlight of this tour was that apart from entertaining fans from all over and selling out venues all across, we also raised a lot of money for charity. For instance, the Calgary concert raised about 40000-60000 Canadian Dollars for the Aga Khan Foundation. It was the largest ever Indian Concert in Calgary with an attendance of almost 5000 comprising of people not only from the city but also from other cities who drove all the way to Calgary to witness the show. It was quite overwhelming since we did not expect this kind of love and affection from the fans. The Houston concert on the other hand raised USD 63000 for the Aga Khan Foundation.

What really happened in the concert? A fusion of Bollywood and some timeless music?

This concert was quite versatile in the sense that apart from playing all our big hits (Band Baaja Baaraat, Chak De, Fashion etc), we also did a special section in which we paid a tribute to the 100 years of Indian Cinema. It's a unique piece which was like a tribute to the legends of Indian Cinema like Dev Anand, Shammi Kapoor, Rajesh Khanna and Yash Chopra. That apart, we also had a devotional section comprising of soft and soothing Sufi music since many of our Sufi songs like Bismillah and Ali Maula are quite popular with the listeners and honestly it is indeed quite amazing to see that a lot of people love listening to devotional songs! Simply put, it was a complete mix of all kinds of music and the dance numbers especially even had people dancing in the aisles! Basically, there was something for everybody and therefore everyone from all walks of life enjoyed it.

I would really have to thank the Almighty, and definitely all our fans. This year we did a beautiful rendition of all our songs in an 'unplugged' style for MTV Unplugged and we are extremely excited to take these all over India and abroad. I have realized that that the songs we did over the past 5-6 years have a certain timeless quality and the inherent timelessness comes out even better when it is played unplugged. When the world is getting into electronics, it is almost like we are returning to our roots.