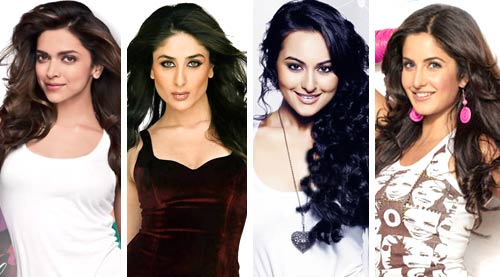 Earlier this year, Priyanka Chopra was at her candid best recently when she stated that she couldn't take credit for her male-driven 100 crore affairs like Don

2 and Krrish. In fact Bipasha Basu too was quoted as saying that most of the 100 crore affairs didn't have anything for the leading ladies to do.

success. Of course this is a matter of subjectivity and hence we have taken a basic benchmark of whether the audience would have anyways walked into theaters, regardless of which

actress played the heroine. In some cases though where it gets 'iffy', we have kept it as 'perhaps'!

The number in bracket denotes count of centuries

Now Deepika is someone who deserved a 100 crore hit much sooner in her career. Nevertheless, when she got there, she earned it in a heap, with each of her three biggies (Chennai

Express, Yeh Jawaani Hai Deewani, Ram Leela) featuring her in an author backed role. As for Happy New Year, she was the chosen one after Farah Khan struggled to find

anyone better. Moreover, she demonstrated good range too. No wonder, even though Race 2 was testosterone driven, Deepika sizzled and enticed audience too.

She is the first heroine to feature in the 200 crore affair 3 Idiots so perhaps she does deserve a credit after all, despite the film being an Aamir Khan show. However, Singham

Returns and Golmaal 3 could well have done with a star of a lesser stature. Having said that, her 'Chammak Challo' act pulled in audience for Ra.One while

Bodyguard is a rare Salman film that needed histrionics from the heroine too.

'Thappad se darr nahi lagta saab, pyaar se lagta hai' - Let's admit it, many of us went to theaters to see how Shatrughan Sinha's daughter was standing up in front of Salman Khan. Also,

Son of Sardaar which involved a love angle.

Katrina is simply the most consistent star-actress in Bollywood for a decade but ironically had to wait for her century turn. When that happened, it was with style as Ek Tha Tiger

fell short by just a crore from the double century mark. She saw mixed response for her performance in Jab Tak Hai Jaan but her name and face pulled in audience. More was

expected from her in Dhoom 3 but only 'Kamli' registered. As for Bang Bang, she was there right through the film and did well with her pretty self doing the trick

She is the one to admit it so who are we to challenge! And since we are up to it, let's add Agneepath to the list as well; a film where it was Katrina Kaif who was more visible in

the promos due to her 'Chikni Chameli' act. However, Barfi! is one film which Priyanka truly made her own, and how. 'Jhilmil' lives on!

She has all the right reasons to be elated when she turned out to be the first ever actress in the country to have a 100 crore superhit to her name, and that too half a decade back. In a

well written role, Asin impressed, and how. She raced from one to four centuries in the quickest possible time too. However the only other century affair where she actually had a

For someone who was down and out after her first couple of releases, Jacqueline has done well to earn a double century recently with Kick. It could have been an out and out

Salman Khan affair but with her 'Jumme Ki Raat' jig, Jackie contributed to at least a few crores added to the total. Ditto with her 'Lat Lag Gayi' act in Race 2. Hang

on there girl, soon you would have an entirely deserving 100 crore affair too!

extent at the least. Even in a supporting part, she managed to leave an impression and though her act opposite Shahrukh Khan in Rab Ne Bana Di Jodi is something that deserved

a century, Anushka got one of her own with PK where she walked 'kadam se kadam' with Aamir Khan

With a distinct Rani Mukerji hangover, Daisy Shah did what was required from her in Jai Ho. She moved to the dance beats, smiled through a couple of romantic numbers and

was convincing in her light hearted scenes. The fact remains though that this could have been achieved by any other well groomed newcomer. There wasn't much added by her

presence in a film that eventually stayed on to be Salman's show.

Rest assured, if Bhaag Milkha Bhaag would have flopped, it wouldn't even have been considered seriously in Sonam Kapoor's repertoire, considering the fact she had just an

extended friendly appearance in the film. However, a success helps everyone and Sonam Kapoor too can smile and be happy with the fact that a 100 crore affair is against her name. A

truly worthy one could be Prem Ratan Dhan Paao.

When the leading lady of a film gets killed in the first five minutes, there are doubts around the length of her role; especially, when the film is centered on clash of two men. Yes,

Shraddha's name adds to the project and that pulled in audience to an extent. She didn't make the film entirely her own but then did melt a few hearts. She did deserve it though with

Amongst the newest entrants, Alia Bhatt is the one to have reached the big league pretty soon and when it came to a 100 crore affair, she hit a six with 2 States. In an author

backed part where the film was entirely centered on her love story with Arjun Kapoor, she won over the audience and managed an exponential fan base soon enough. Expect this count

to 'deservingly' increase manifold in years to come.

She has the looks and that pretty face of hers did impress in Singham. However, in a film with a cop and jeeps with Rohit Shetty is a director, there would always be more guns

than roses. Kajal did make a decent impression but wasn't really irreplaceable. Post that she has been seen in only one Hindi film Special 26 where length (and importance) of

her role was similar to Singham. She deserves better.