Zee TV’s singing reality show Sa Re Ga Ma Pa Li'l Champs has been ruling the hearts of audiences for several years. After receiving an overwhelming response to the previous eight seasons, the channel recently launched the 9th season of Sa Re Ga Ma Pa Li’l Champs. This season kicked off with Shankar Mahadevan, Anu Malik and Neeti Mohan as the judges and Bharti Singh as the host and is now is yet again impressing everyone with their powerhouse performers. While the show has its final 13 contestants, to add more drama to it, this weekend, will see special guests in the form of Bhediya co-stars Varun Dhawan and Kriti Sanon making a guest appearance on the show. 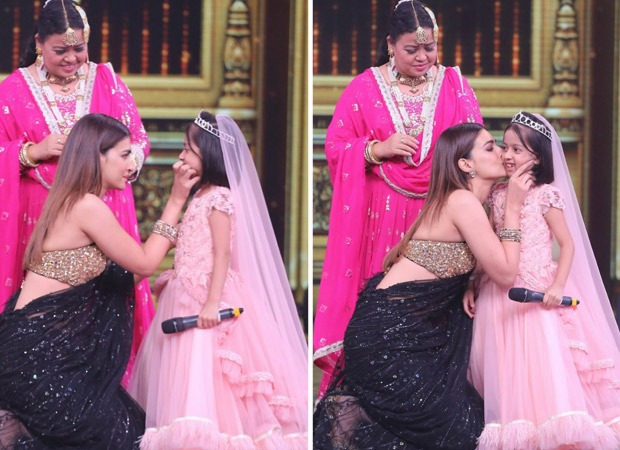 Sa Re Ga Ma Pa Li’l Champs: Kriti Sanon is left impressed by contestant Aarohi; actress wishes to have a daughter like her

Viewers will have a gala time as they will get to watch Varun Dhawan and Kriti Sanon in their elements as they will be seen gracing the forthcoming special episode of ‘Suron Ka Darbaar’. While all these talented kids impressed the judges as well as the special guests with their amazing performances, it was contestant Aarohi’s performance to the song ‘Mere Khwabon Mein’ that stole everyone’s heart. In fact, Kriti found her so adorable that she revealed, she wants a daughter exactly like her. Kriti whispered in Varun’s ear saying, “I want a daughter like her.” which Varun revealed while giving his compliments.

While the judges and the special guests were wowed by these performances during the special episode of ‘Suron Ka Darbaar’, the show promises to have many more of these extravagant performances by these contestants. Sa Re Ga Ma Pa Li’l Champs airs every Saturday and Sunday at 9 pm, only on Zee TV.

Meanwhile, talking about Varun Dhawan and Kriti Sanon, the onscreen pair arrived to promote their forthcoming Bhediya that features the SOTY actor in the role of a werewolf. Directed by Amar Kaushik, this creature comedy is a part of the Dinesh Vijan spooky universe, produced under his banner Maddock Films. The film will hit the big screens on November 25.

Also Read: Bharti Singh as turns host for Sa Re Ga Ma Pa Li’l Champs; says, “This is the first time I will be hosting a reality show with kids”