Rohit Shetty and Akshay Kumar begin shooting for the first schedule of Sooryavanshi today and they took to their social media to share an epic picture that included Ajay Devgn, Ranveer Singh, and Karan Johar. Sooryavanshi is the third venture in Rohit Shetty’s cop series, the first two being Singham and Simmba. It all started when Singham starring Ajay Devgn smashed records at the box office leaving the audience wanting for more. 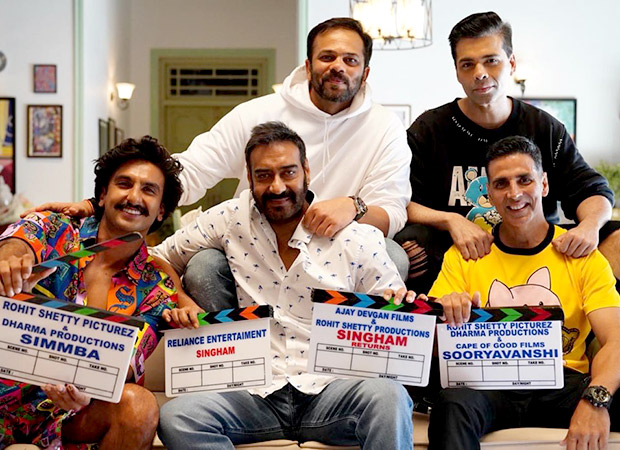 After Singham Returns, Ranveer Singh joined forces with Rohit as Simmba and yet again managed to cross a whopping 232 crores at the window. In the post-credit scene of Simmba, a teaser of Sooryavanshi was shown and the fans went bezerk to see Akki as the newest addition. As for the leading lady of Sooryavanshi, there were reports that Jacqueline will be seen playing his wife on screen, however, Katrina Kaif has been roped in for the role and will soon join the duo on sets. Akshay posted the picture with the caption, “The cop universe just got bigger as #Sooryavanshi takes charge! @ajaydevgn​ @RanveerOfficial #RohitShetty @karanjohar #KatrinaKaif​ ​#KareenaKapoor ​​#SaraAliKhan​ ​​@RSPicturez @RelianceEnt @DharmaMovies #CapeOfGoodFilms”

The cop universe just got bigger as #Sooryavanshi takes charge!

We can’t wait to get our hands on more pictures from the film’s set. Sooryavanshi is under Karan Johar’s Dharma Productions’ banner and is slated to release around Christmas, this year.