It’s clear that Hindi cinema now is all about new pairings for all. 2020 is replete with fresh pairings, but there have been—in the last one year—some standout old pairings that have struck gold, or are set to in the year to come. 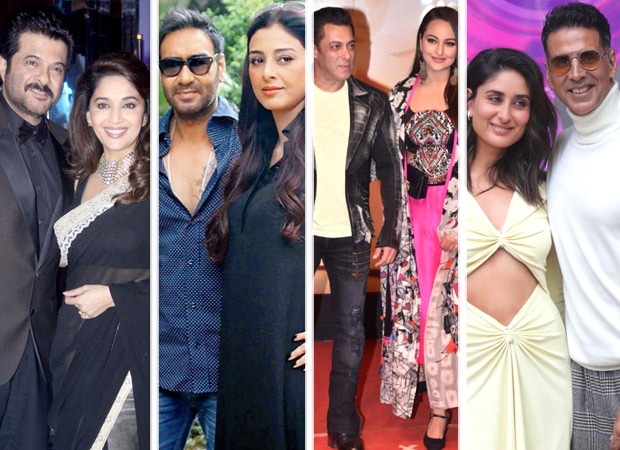 1. Anil Kapoor-Madhuri Dixit (1988, 1989, 1990, 1992, 2019)
Total Dhamaal proved that the fire was still there in the pair that dazzled with fair consistency in films as diverse as Tezaab, Ram Lakhan, Kishen Kanhaiya and Beta. Even a flop like Pukar had a sizzle in their chemistry. As the Gujarati-Marathi husband-wife pair that is temperamentally incompatible, they were excellent in the 2019 comedy, which despite the naysayers, struck gold at the box-office.

2. Ajay Devgn-Tabu (1994, 2019)
Tabu achieved stardom with Vijaypath (1994) and never looked back after being the ‘Ruk Ruk Ruk’ girl who was after Ajay Devgn. That was reel life. In real life, she struck an easy and lasting camaraderie with him and they remain friends, and did non-starters like Haqeeqat and Thakshak. In the millennium, they co-starred without a romantic angle in Drishyam and Golmaal Again, botb successful. But with De De Pyaar De, one of the most delightful romantic comedies of recent times, they revived their reel romance as the crackling divorced couple, their interactions on-screen as enticing as that between Ajay’s character and his young flame, Rakul Preet Singh.

3. Salman Khan-Sonakshi Sinha (2010, 2012, 2019)
Yes, the film underperformed, but the Chulbul-Rajjo chemistry was as good as in their first two films that had worked big. In fact, Sonakshi Sinha gave a better account of herself in Dabangg 3 than in all her other recent films, and for Salman loyalists, he too was as dashing as ever. And forget returns on investments for a while, but the film did cross a nett Rs. 146 crore in India with a worldwide gross of Rs. 230 crore.

4. Akshay Kumar-Kareena Kapoor Khan (2001, 2004, 2015, 2019)
Ajnabee, Aitraaz and then Gabbar…Is Back after a gap with Kareena Kapoor Khan’s cameo were all successes: their other films did not do well, but that did not stop Karan Johar and Akshay Kumar as co-producers from casting Kareena with the latter when the roles demanded them in Good Newwz. It was a whopper hit, far bigger than their three earlier successes. And the AK and KK sizzle had grown!

5. Ajay Devgn-Kajol (1997, 1998, 2010, 2020)
They had a prolific run together, including two films produced by Ajay (Raju Chacha, U Me Aur Hum), of which he directed the latter as well. However, most of their movies were flops, and only Ishq (way back in 1997), Pyaar To Hona Hi Tha (1998) and the break-even Toonpur Ka Superrhero (2010) made the grade. Providence had, however, saved their best for the latest, and including them, no one had any inkling how big their latest film, also Ajay’s home production, would be. Tanhaji: The Unsung Warrior is anything but unsung! 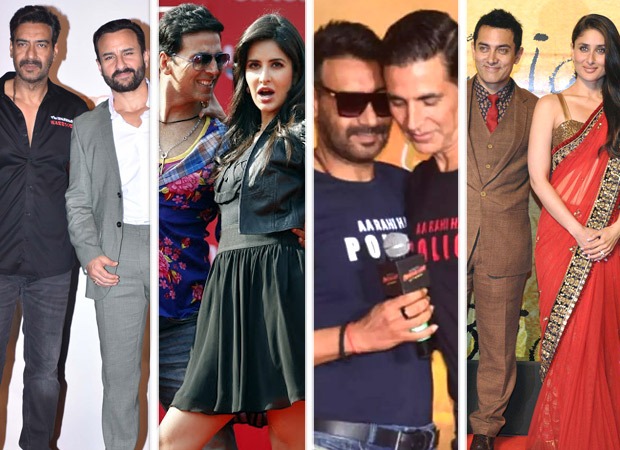 6. Ajay Devgn-Saif Ali Khan (1999, 2006, 2020)
Tanhaji: The Unsung Warrior also brought back the successful Ajay Devgn-Saif Ali Khan pair of the 1999 Kachche Dhaage, in which they were seen as buddies. There was also the fiery Omkara, the critically acclaimed flop, in which Saif was a manipulative blackguard who incites Ajay. In Tanhaji…, they were deadly antagonists.

8. Akshay Kumar-Ajay Devgn (1994, 2004, 2020)
As on-the-way-to-superstardom top heroes, the two had come together in the 1994 hit Suhaag, and were seen together again next after a decade in the gripping Khakee—this time Ajay was the nasty one on screen. They now return in Sooryavanshi in which Singham Ajay will make a special appearance. And Rohit Shetty will have Akshay in a cameo in the next Singham as well, and is planning his own cop universe movie with both of them and Ranveer Singh playing Simmba.

9. Aamir Khan-Kareena Kapoor Khan (2009, 2012, 2020)
3 Idiots was all of 11 years ago, and Talaash is almost eight years old. Come Christmas, Aamir Khan and Kareena Kapoor Khan will come together in Aamir’s production (like Talaash, which he had co-produced) Laal Singh Chaddha. The film is a remake of the Hollywood hit Forrest Gump.

10. Saif Ali Khan-Rani Mukerji (2004, 2020)
They won hearts way back in 2004 with Hum Tum, the romantic musical by Yash Raj Films and producer Aditya Chopra. After this came two flops from the same banner—Ta Ra Rum Pum and Thoda Pyaar Thoda Magic— and now Saif Ali Khan and Rani Mukerji are back in Bunty Aur Babli 2 produced by someone who is now her husband—the same Aditya Chopra! The official version is that things did not work out with the original Bunty—Abhishek Bachchan, who was also there in Hum Tum.

Of course, this film has a younger Bunty and Babli as well in Siddhant Chaturvedi and Sharvari Wagh, but Saif and Rani will, we suspect, also provide big fireworks in this con caper.