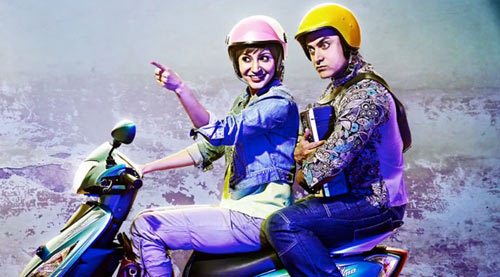 Modern Popular cinema for most part has kept away from religion as a central theme. However, successful mainstream films like PK and OMG! Oh My God could well change that


Rajkumar Hirani's long nurtured dream to make a film challenging religious malpractices dates back to a time even before 3 Idiots, when during an interview he had mentioned how strongly he felt about the touchy subject of religion-the Godmen, silly superstitions that bind and scores of mindless malpractices that have found their way into our lives- and of course, his intention to make a film about it. Quite evidently, signs of it showed up in the Manglik bride track in Lage Raho Munnabhai. He had something of a story in mind then, but showbiz wisdom suggested that it wasn't quite the idea whose time had come. The conversation nevertheless ended on an optimistic note that a film that would not even spare the holy cow, alias religion, would certainly be made.


Hirani kept his word and five long years after 3 Idiots, he set about questioning religious turpitude and hypocrisy in the simplest and most innocent manner through the eyes of an alien. Aamir Khan's fabulous performance and earnestness rescues the film from the banality of rhetoric that it could have otherwise suffered from, resulting in some spectacular numbers. This is a welcome change from a time when the only place to find religion, theology and suchlike as a central theme was in niche art house cinema. Just a few years ago, film-maker Bhavna Talwar made a poignant film titled Dharm starring Pankaj Kapur which was about a conservative Hindu priest in Benares who unknowingly adopts and brings up a Muslim boy and his ensuing dharmsankat sharply questioning the notion of not just religious profiling and prejudice but also the question of which dharma (duty) should eventually prevail-one of religious doctrine or our duty towards humanity and the larger good.


Umesh Shukla's OMG! Oh My God, based on a Gujarati play, Kanji Virrudh Kanji was about a man (whose house had been destroyed due to an earthquake), suing god for the damages incurred, since the insurance company refused to pay up for any loss caused by an act of god. Paresh Rawal as Kanji questioned the mindless practises, calls Godmen's bluff and pointed out mankind's constant need to seek refuge in a constructed higher power. In an ironic twist of fate, Kanji who questions the very notion of god, ends up being deified himself when people begin to worship him as someone with special powers!


Mainstream film's brush with religion for most part has been one of convenience -to largely support the theory that God lends his heft to those who struggle to lead the good life. Earlier, heroes in Hindi films were supposed to be modelled on Lord Ram, the perfect man, while later many a mainstream film like Amar Akbar Anthony espoused the cause of communal harmony in imaginative ways, with thought provoking moments in between. Amitabh Bachchan's "Aaj khush to tum bahut hoge," conversation with God in Deewar, was memorable for its rebellious tenor although eventually he stands chastised as does Kanji in OMG... for being a non believer. PK is a gentler take-it makes an allowance for the opium of the masses as long as it doesn't become a deathly addiction.


In these befuddling times when, 'my religion is bigger and better than yours' is creating major conflicts around the world, thought provoking discourse on the subject, especially through films, is welcome. And PK is a big step forward in that direction.