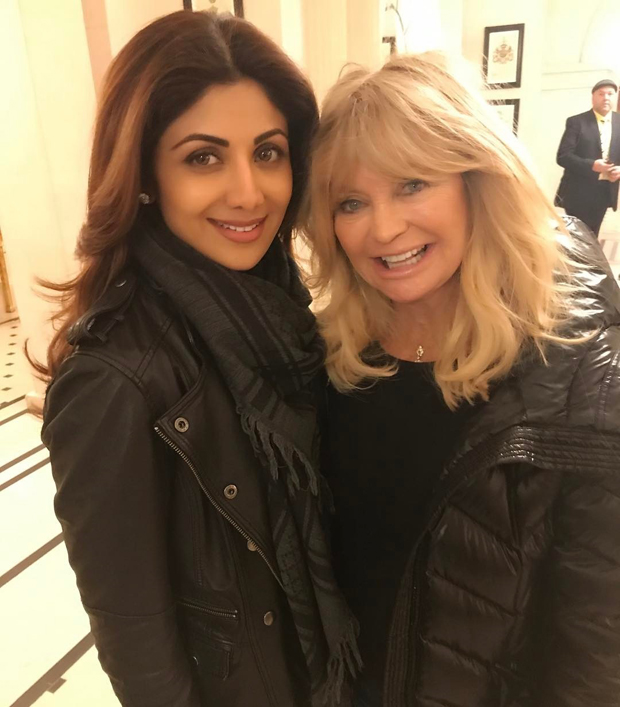 We all know that even though Shilpa Shetty has showed no interest in returning to acting, the actress is more than happy promoting fitness. Spreading word about leading a healthy lifestyle is Shilpa’s new motto and the actress has been urging people to opt for the natural remedy of yoga in India and abroad.

Shilpa Shetty also receives several invites for giving lectures about yoga and fitness and whilst doing the same, she came across American actress Goldie Hawn. The former actress was in London along with entrepreneur-hubby Raj Kundra for work as well as a mini vacation. During the trip, Shilpa had a fan moment of sorts when she met the Hollywood star and we hear that the two bonded quite well.

It is being said that the 71 year old Hawn, who still looks amazing and fit, was equally happy to meet the actress. Reportedly, the two of them bonded over food, fitness and health. We hear that the two even discussed about yoga and Goldie’s knowledge on the subject left Shilpa quite impressed.

Furthermore, Shilpa Shetty posted a picture with Goldie Hawn on Instagram, saying, “Lovvveeed meeting u @officialgoldiehawn , such an invigorating convo Totallu agree with all you said, we are connected by the soul Can't wait for u to come to Mumbai #soulconnection #yoga #allheart #friendswithnobenefits.”

Besides yoga and fitness, Shilpa Shetty has also taken a liking to cooking and shares several recipes of nutritious yet scrumptious meals on social media. As far as her forthcoming Bollywood ventures are concerned, the actress is yet to make an announcement.