Last Updated 14.07.2020 | 3:54 PM IST
feedback language
follow us on
Home » News » Bollywood Features News » Bollywood News This picture of Ranveer Singh with Kapil Dev from the sets of ’83 will make you curious about the film!

Not too long ago we had reported that Ranveer Singh is currently in Dharamshala training with his cricket team of actors! Or rather, the cricket practice is in session for the ’83 team who are now all set to play real life cricket superstars. They are accompanied by none other than the legendary cricketer himself, Kapil Dev. 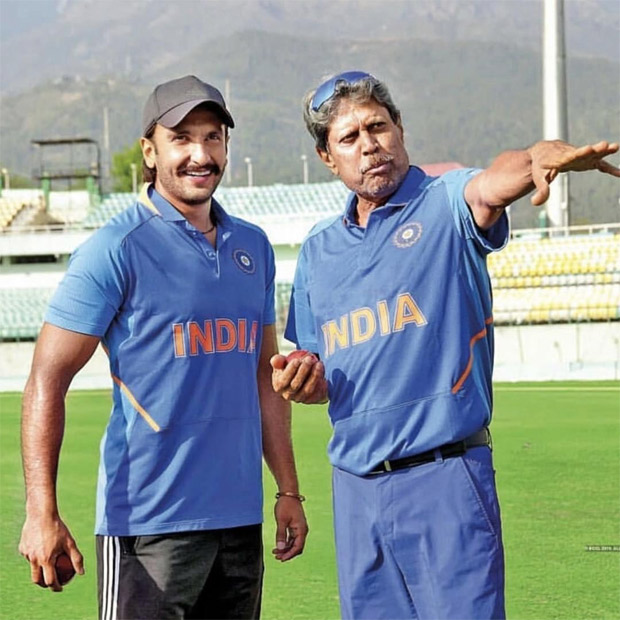 While Kabir Khan and the rest of the team are constantly practicing the sport in the stadium, we came across this amazing moment where we see Kapil Dev teaching Ranveer Singh. A moment truly worth capturing we had say. It was shared by none other than the Gen Y star himself on social media saying, “LEGEND! #KapilDev @83thefilm #blessed #journeybegins @kabirkhankk.”

Kapil Dev is training Ranveer and his team to reprise the 1983 Cricket World Cup win. After training in the city, the cast and crew of the film will be heading overseas for the shoot.

Recently, the star-studded cast of one of the most anticipated film '83 takes a deep dive into the film is creating splashes quite literally as the actors share their playful pictures from Dharamsala.

Bringing to screen one of the most celebrated and coveted events of Indian Cricket; the Kabir Khan directorial is mounted on a huge scale. The makers are leaving no stones unturned into stirring the excitement of the masses as they unveiled the cast portraying the various cricketers of the '83 team.

Earlier, the makers hosted an event to announce the film along with the entire former team. Shouldered by the then captain Kapil Dev, who led the Indian cricket team to its maiden World Cup win, 1983's World Cup stays to be one of the most etched events in the minds of the cricket fans. Touted as the biggest sports film of the country, '83 is slated to release on April 10, 2020 in Hindi, Tamil and Telugu. It marks the first ever trilingual release for both Ranveer Singh and director Kabir Khan.