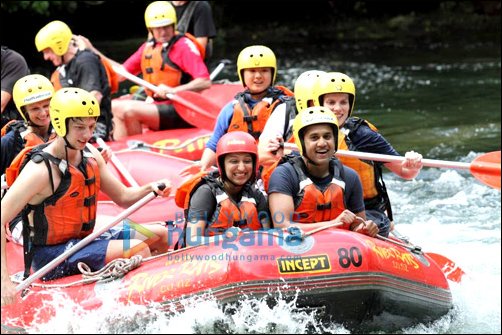 After an outstanding performance as Chatur 'Silencer' Ramalingam in 3 Idiots followed by Dil Toh Bachha Hai Ji, Omi Vaidya will be next seen in action-thriller Players, shot in New Zealand. Despite a busy schedule filled with riveting car chases against Wellington's hillside terrain, Omi didn't waste any time in exploring the country's bounty of attractions along with his co-stars. Talking about his adventure, Omi says, "Filming for Players in New Zealand was a dream come true. Our first location, Wellington, really grew on us as it was big enough to explore, but small enough to not feel lost in. Although it is known as Windy Wellington, I actually enjoyed the weather. The small quaint shops and little streets really promoted us to walk around and explore. And we were lucky enough to celebrate Abhishek Bachchan's birthday during the Rugby Sevens victory party that happened all night on the streets. That was quite a night! In Auckland, we visited the Casino and got to go to some really nice beaches. New Zealand is such a nice country; it's hard to keep focused on work."

Post his Auckland schedule, Omi traveled indulged in white water rafting in New Zealand's geothermal paradise, Rotorua alongwith his darling wife, Malini, who flew in from USA to join Omi. Omi adds, "The white water experience was amazing. Rafting in Rotorua was a thrill beyond comprehension! Not only did I raft down the highest commercial rafting drop of 21ft. in the world, but I also felt completely safe doing it. It was so fun and a memory I won't forget." Talking about his wife, Omi says, "Minal is a bigger thrill seeker than me. We have tried skydiving in Hawaii, waterskiing in Jamaica, and Scubadiving in Tahiti. But New Zealand definitely has a lot to offer us, so we will have to come back for more."

Talk of having the 'perks' of being a film star!