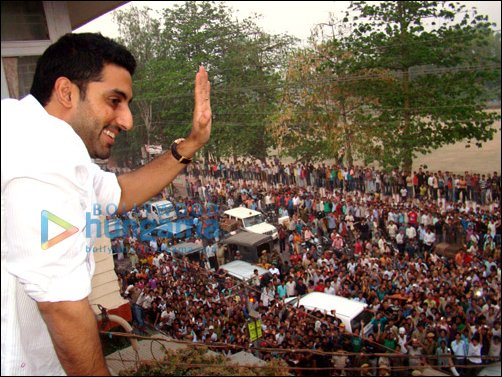 At around 6 pm, when Abhishek taken off his shoes and had plonked himself comfortably on the floor in our house and we were all bitching about the whole industry, a neatly dressed man walked straight in and requested for a picture. I presumed he was part of Abhishek's extended entourage of security guards, publicity co-ordinators and photographers. He turned out to be a man from the street who had slipped past the tight security, walked confidently up the four flights of stairs to our top floor, got his picture and walked out.

By this time, the crowd that was around 500-people strong when Abhishek had arrive at 5.30 pm had swollen to approximately 2,000 shouting screaming frenzied furious youngsters (all male) upset that the star in our house was not giving them a darshan.

Our road was completely jammed from start to end. Members of Abhishek, Rohan Sippy and Rana Daggubati's team who had stayed back in their vehicles on the streets below our house were struck inside their cars.

There was no space for them to open their car doors and come out in the open for breather! As news spread in and around our neighbourhood of Abhishek's visit, the street began to get even more jam-packed. It was quite impossible for anyone to get in or out of our house.

For all practical purposes, Abhishek was stuck inside our house. Abhishek showed no sign of worry let alone panic. "Let them be. I'm in no mood to leave," declared Abhishek nonchalantly.

My wife suggested he use our guest room for the night. "But they'd have to leave in the morning to catch their flight, no? These people out there are going to stay put all night if they have to," Abhishek's young PR girl was about to burst into tears.

This was Amitabh Bachchan's son's first visit to Patna. No one was in the mood to let this visit be anything short of memorable for Abhishek. "Abhishek! Abhishek!" They chanted and roared. I am sure the chant was heard all across Patna right into Nitish Kumar's residence. Soon messages to cops accompanying Abhishek began to come from the CM house asking for a meeting with 'Bachchan Saab Ka Suputra'.

Bachchan saab ka ladla was in no mood to oblige. He hadn't slept for four nights, travelling from city to city to promote Dum Maaro Dum.

After a while, a senior police officer rushed into our home to request Abhishek to come out on the terrace of our house every 15 minutes and wave to the crowds. This was to prevent mob fury, we were told. Abhishek did even better. He smiled waved blew kisses at the crowds. The roar, I am sure, could be heard all across Bihar by now.

At around 8.30, Abhishek's security service began to get enormously jittery. "If we don't leave now we won't be able to get out of here."

We wondered why Abhishek was so cool about the imminent collapse of his elaborate police bandobast. We soon found out.

When it was time to leave Abhishek walked coolly to the terrace as the roar on the road reached a crescendo. Like Anna Hazare, he waved to them to quieten down. They obeyed. Then he signalled that he had to leave to get some sleep.

The crowds seemed to understand exactly what their demi-god meant. When Abhishek and the entourage stepped down and got into the car the crowds parted like the Red Sea as the modern-day Moses swept out of the bustle.

"Soon, this will happen to you too," I consoled Rana just before they left. He grinned some more and quipped, "Awesome."