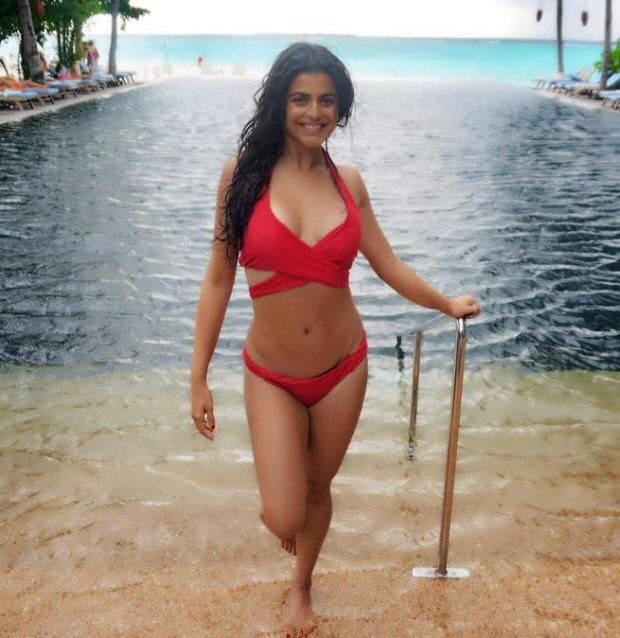 Shenaz Treasury’s Instagram handle should be followed religiously. She not only posts sizzling hot pictures of herself but she also clicks them in some of the picturesque locations of the world, which satisfies even the travel lovers. Just few days ago, we informed readers about how the hottie was spotted kayaking near the island of Kandolhu in Maldives where she is currently holidaying. And now Shenaz Treausry has posted another picture that has simply taken our breath away!

The image in question features her in a red-hot bikini and coming out of a pool after a relaxing swim. Her hair is wet and her body is toned. The caption reads, “Feeling very PG-13 at the adults only pool.” And we totally believe her. After all, this 36-year-old has stopped ageing since a long time and in fact, is getting better and sexier, as evident in this picture. The picture has been clicked in the beautiful The Sun Siyam Iru Fushi resort.

On the film front, Shenaz Treasury has been sadly become very choosy. She was last seen in a miniscule role in Tiger Shroff-starrer Munna Michael. However, she is expected to have a significant part in Akshat Verma’s Kaalakaandi, co-starring Saif Ali Khan and Akshay Oberoi. It is all set to release on September 8. She has also made waves in Hollywood and was recently seen playing a supporting part in The Big Sick, which released a month ago. She has also made a mark in American television with shows like Brown Nation and One Life To Live.