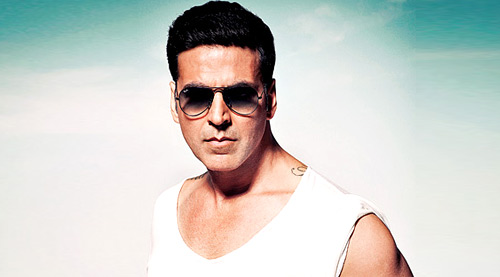 Akshay Kumar chats with Subhash K Jha on his wife's writing skills, his own involvement with charitable causes, and the success of Baby.

Twinkle, your beautiful wife, is proving to be a terrific writer. She does a column and she's also doing two books. Proud of her?
My wife has always been very good with her words, whether they are witty or kind, blunt or honest, her tongue has a way of working that makes everyone in the room sit up & listen. I couldn't be more proud of her, from an actress to a devoted mother, owning her own business and being one of the most creative interior designers in the industry, she was once known as Mrs Kumar, but in all honesty she rocks as Mrs Funny Bones even more.

Do you give her the space to do what she wants?
I am behind her every step of the way. The best thing is, I get to be the first to hear all her adventures & stories before they go to print.

You recently trained visually impaired girls in your martial arts classes. Please share this with us?
It was one of the most humbling moments in my life. To see these blind girls giving their absolute best to learn self-defense is just unbelievably inspiring. Can you imagine, if these girls have the strength and courage to get up and fight for their lives even with the biggest of disabilities that means everyone should and could do the same.

It must have been a spiritually and emotionally enriching experience?
To see the smiles on their faces and the energy in their punches was such a highlight in the martial arts community. We are the first self-defense system to promote and teach these classes successfully. And with the help of the blind girls' parents taking them through every movement with them in the class is a bond you've never seen before.

You sound deeply moved?
This is definitely one of the most important things I've ever done with my life and with my power to give women and children the one thing that can protect them personally is a gift like no other.

Something else to make you happy... Baby has taken off in a big way in the second and third week. Did you expect it to be a slow winner?
We always knew Baby was going to have a slow and sturdy opening, and rise in its own sweet time! With no commercial element to it whatsoever, no songs, and because of its political agenda, it was always meant to be a word-of- mouth film. We all knew it would be a slow winner which is why we're so happy that even in its second week it was appreciated more than I could have wished for.

It takes guts for a massy hero like you to enter realistic cinema?
True, this genre is specific to a certain audience. But to get the love and support from all over is just heartwarming beyond what I could imagine. This film has soul, it has a purpose, but more so it has a reality we all face every day. Terrorism is something we've all learned to live with unfortunately, yet we will never know just what some people go through to protect us as much as they do, Baby is that reality.

How did you react to the reviews and critical acclaim for the film and your performance?
Well the reviews quite frankly blew me away. The fact that I thought and believed the film was outstanding in its own right is one thing. But for others especially critics to enjoy and respect our film for all it's worth, was another!!

Is Baby your most critically acclaimed film and performance to date?
To proudly stand here, after 24 years in this industry and genuinely be rewarded with 5-star reviews was one of the greatest feelings I've ever experienced. When I got to know about the reviews, and I was flooded with phone calls, I was so overwhelmed with surprise and gratitude, I'm still smiling, even though I'm already on another set, getting my face smashed in for Brothers.