Akshay Kumar will be reuniting with Pad Man director R. Balki for Mission Mangal based on India’s 2013 space programme of Mangalyaan mission. He will be starring alongside Heyy Baby co-star Vidya Balan. This morning, it was announced that Mission Mangal will be co-produced by Fox Star Studios and Cape Of Good Films. Bollywood Hungama was first to inform that Sharman Joshi and Nithya Menon have been roped for the film. 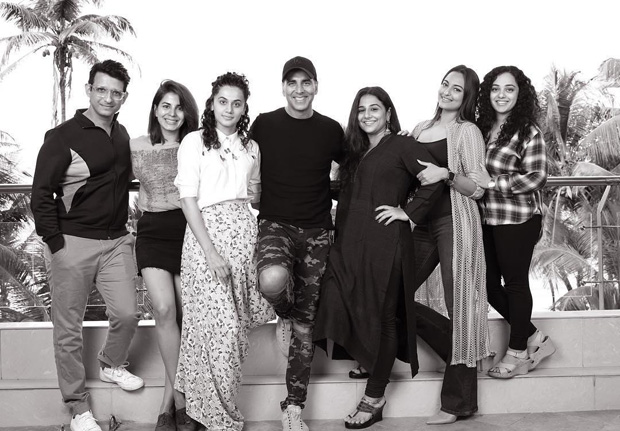 Today, Akshay Kumar announced the complete cast of Mission Mangal. The film, which will focus on women scientists who were involved in the mission, will star Kriti Kulhari, Taapsee Pannu and Sonakshi Sinha alongside Akshay, Vidya Balan, Sharman Joshi and Nithya Menon. Akshay took to Instagram to share a picture with the entire cast and wrote, "Proud and excited to bring the story of India’s Mars Mission, #MissionMangal to you. Coincidentally the mission was launched on this very date, 5th Nov. 2013. Meet the team and do share your best wishes for our shubh mangal journey. Helmed by Jagan Shakti, shoot begins soon ???????? @foxstarhindi @sharmanjoshi #KirtiKulhari @taapsee @balanvidya @aslisona @nithyamenen."

The synergy will see an array of distinct entertainers over 3 titles with Akshay Kumar in the lead, to be jointly produced by Fox Star Studios and Cape Of Good Films. The first film to come off this partnership will be India’s first space film, Mission Mangal, which is in collaboration with R Balki & the film will be directed by Jagan Shakti. The shoot for Mission Mangal commences in mid-November.