Rani Mukerji was shooting her much-awaited next, Mardaani 2, for about a month in the blistering Rajasthan heat. In the desert state, Rani shot about 90 percent of the film and the schedule wrap saw her bonding with the entire crew of the film. 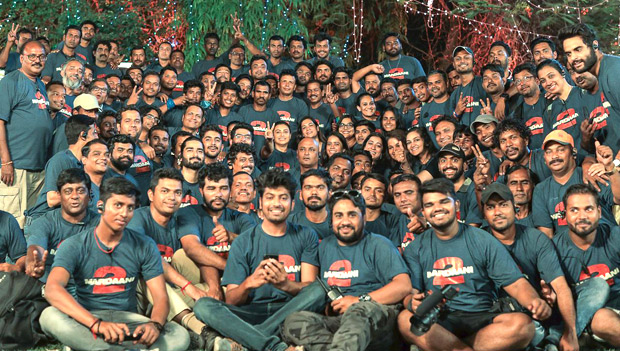 “It was a severely intense shoot schedule because of the summer heat in Rajasthan. The entire team has worked relentlessly to finish the shooting schedule as per plan and it was because of them that the shoot went off so smoothly. Rani recognized that and took some time to bond with the entire crew post the wrap,” reveals a production source.

“Rani is a livewire on set and she usually brings the house down with her sense of humour. The crew was touched with her warmth as she interacted and bonded with everyone one on one. Rani values her crew like it’s her family and it showed all through the schedule. Rani and the crew have wrapped a very challenging second schedule of the film. Now, the final schedule will be shot in Mumbai,” the source adds.

Rani reprises the role of the fearless and committed Superintendent of Police, Shivani Shivaji Roy in Mardaani 2. She had delivered a knock-out performance in the superhit and hugely acclaimed prequel, Mardaani, in which she took on the kingpin of a child trafficking racket. There is a lot of anticipation on who her villain will be and the crime that Rani will try and solve in the sequel. Produced by Aditya Chopra, this will be Rani’s next release after the global blockbuster Hichki. Mardaani 2 marks the directorial debut of Gopi Puthran, the writer of the first Mardaani film.