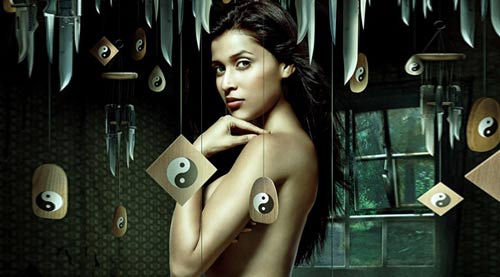 Just when one thought that Bollywood's annual quota of bold films was through after the success of Ragini MMS 2 and Hate Story 2, the promo of Zid has surprised everyone with the uninhibited body display on screen. While the makers are pretty much pitching the film as a bold thriller instead of an erotica, what hasn't failed to make its presence felt is an unabashed act by debutant leading lady Mannara who seems to be on fire. The boldest of them all amongst all four Chopra sisters (Priyanka, Parineeti, Meera) who have found varied degree of success of in Bollywood so far, Mannara is ready to take on Bollywood.

"See, boldness is not just about stripping on screen. Of course this is one thing people instantly notice and hence term it as daring indeed. However, it isn't as if some scenes are randomly put together to titillate. There is a purpose and reason behind what is happening on screen," says Mannara, who is clearly one of the most awaited debutants to arrive on the big screen before close of 2014.

Produced by Anubhav Sinha, the film is a thriller with three youngsters finding themselves in the middle of an obsessive love story. While Mannara has quite a few volatile encounters with Karanvir Sharma and Shraddha Das in the film, she also had to physically drain herself, courtesy her shooting stint that required her to be drenched in rain for 45 days straight.

"Now I would say that is being bold," adds Mannara, "I mean how many films have you seen a girl shooting in rain from 7 in the morning till 10 in the night for 45 days and that too in the middle of a forest? Moreover, the film was physically quite demanding as well. If I had to hold a wooden log in the hand so as to hit, or hold a pistol to shoot, then I had to look convincing enough. Main aisa nahi keh sakti thi apne director se ki aap mujhse yeh kya kara rahe ho, main thak kar gir jaayoongi. It is just that the body display gets highlighted the most but I can assure you that Zid is a lot more than that."

Still, the fact remains that while Zid is leading from the top as far as online visibility is concerned, for a large section of gentry, the film is about how far would the leading ladies, the other being Shraddha Das, go on screen.

"Well, there are all kinds of people in the world and you can't change everyone's opinion," sighs Mannara, "If I had to just go bold with no acting involved then I am sure Anubhav could have taken any other chic glamour girl or a model. He wanted an actor and took me. I hope I have performed to the best of my abilities."

One hopes the film indeed goes beyond the skin show and turns out to be an affair with several twists and turns in the plot. "I believe the promo pretty much conveys that and for me, this means that half the battle is already won. Zid is a very interesting film which has all the shades to my character. We are touching every human emotion with the film where I go from being a normal girl next door to being evil and dangerous. Some people may even be scared as if they have seen a ghost."

Aah, now that would be something.