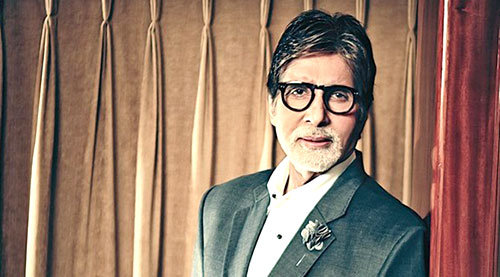 "The idea is to share our feelings, creativity, films, our culture etc. with the people of Egypt and they have always been very appreciative of our work," said Amitabh Bachchan in a Bollywood Hungama exclusive interview with Faridoon Shahryar at the 'India by the Nile' festival in Cairo, Egypt where Mr Bachchan was the guest of honour. He was celebrated by the Egyptians as if he is a President/Prime Minister of a major country. Mr Bachchan was also awarded the Honorary Doctorate by the prestigious Academy of Arts. In this interview Big B also speaks about the honour of Padma Vibhushan that has been bestowed upon him recently.

It is a proud feeling to see that everybody is crazy about you here in Egypt. We came across a shop in a local market in Cairo that is named 'Mard'. How do you react?

(Laughs) I was equally surprised when I came here in 1991 for the Cairo Film Festival. I had been here before in 1975 for the shooting of The Great Gambler. Then, not many films of us were seen and many didn't know us then. But my visit in 1991 was a great revelation. Mard for some reason has been a very popular film here! The love and affection that I have received here from the people is unimaginable.

Surprisingly, the people don't understand Hindi. I met an airhostess who watches your film with the help of Arabic subtitlesâ€¦

I realized the importance of this craze when I came here in 1991. But it's wonderful to know that our films are being appreciated in Egypt

A senior official said yesterday that if Big B stands for elections, he can beat the current President of Egypt!

(Laughs) No no, there's nothing of that sort!

Could you tell us about your views on the initiative by the Egyptian tourism and the Indian Embassy in organizing the 'India By The Nile' festival.

Both countries share a very long history of friendship and trade, apart from the fact that historically, our cultures are so old. It's great to see the efforts to bring both the cultures together. The idea is to share our feelings, creativity, films, our culture etc with the people of Egypt. And they have always been very appreciative of our work.

How do you relate with this pride of being Indian especially when you move out and come to a place like Egypt?

We are foreigners here and it's through our cinema that they are getting to know us. And it's so good for our industry which was not kindly looked upon 60-70 years ago. And now the film personalities are becoming cultural ambassador of sorts. I don't know whether this is good or bad for the country! But the fact is that it has become a parallel culture for the country.

India has a huge population and a large number of people travel to foreign locations. Do you think they should rediscover Egypt. They have had a rough time since the revolution in 2011 but presently things seem normal out here.

Yes, most certainly. Egypt has always been a very important destination for the tourists because of the history and so many tourist destinations like the pyramids, river Nile, museums etc. And there has been a great flow of tourists. And now with things normalizing in Egypt, it's good to act as an agent wherein cinema is brought here and tourists too flock to the country.

You're as good as citizen of the country!

Well, I feel very much at home here!

You have had this evening at the Pyramids and Sphinx during the inauguration of 'India By The Nile'...

I've been there many times as a tourist and even when I was working. Also, when I came here in 1991. It's wonderful to be there. It's such a historical place. I really want to think the Government of Egypt and the Indian Embassy for organizing this festival at this lovely location. They have a wonderful sight and sound presentation at the Pyramids. It talks about the history and how history rotated around these Pyramids. And it's quite great that we are having 'India By The Nile' at this historic location.

What are your views on being awarded the Padma Vibhushan? It's a huge honour

I am very grateful to the Government of India for the recognition. This is the third honour for me, after Padma Shri and Padma Bhushan. There are many in my family who have it - my father, my wife and my daughter-in-law. There's a great responsibility that comes with it. There's also the fact that cinema and films are important entities in our culture. That's what gives me a lot of pride.

You've often stressed on the importance of failure. You even call it a blessing. Can you please elaborate?

Yes, because you can carry on being successful and not know what failure means. But I think you value success more once you have failure. It teaches you where you can go wrong and how to prevent yourself from making those same mistakes. So I look upon it as a blessing. I know one goes through a rough time but it's a great learning. There are many things that failure has taught me which I hope that I can bring it to practice. And it's always that constant entity that you always look out for. That's why I felt that failure is very important.