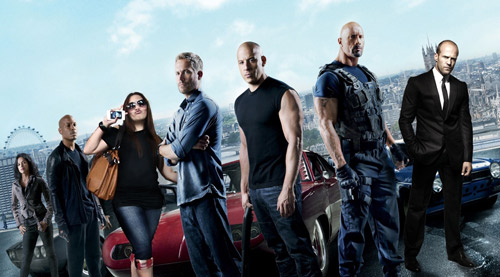 There are many reasons why audiences world over would clamor to see the 7th installment of the Fast & Furious series.


Right now, after sitting through a whirlwind of spinning wheels, screeching brakes and bursting tyres, I can't think of one reason why anyone would want to watch Furious 7 for any other reason except as penance for all the paap that we committed while waiting for Fast Furious 6 to transit no. 7.


Oh, the things one does when at a loose end!


Unless you are diehard fan of the late Paul Walker- which considering his seriously limited performing prowess when not behind wheels seems an improbable state to be in -there is little here that can hold your interest.


If you want to see some solid auto eroticism Furious 7 is just your thing. The cars don't zigzag crazily through crowded roads and deserts anymore. They plunge from thousands of feet somersaulting elegantly midair cutting through the skyline in whoosh of wondrous aero-dynamics. The applause is deafening. The purpose of the chic mayhem, unclear.


If Furious 7 has a human embodiment it would be Sunny Leone. A sensational body! But no soulâ€¦ The performances are downright clownish. You'd think after spending close to ten years with the franchise Vin Diesel, Dwayne Johnson (this time with a cast on his hand that he rips off pre-climax) and others would have learnt to actâ€¦ just a teeny-weeny bit? No such luck. All the actors, even the habitually competent ones like Jason Stratham (playing the arch villain) and Kurt Russell (cast as what Ocean's 11 would describe as mentor) seem to be rehearsing for a play on the side-effects of marijuana.


High on the dope of adrenaline but abysmally short of breath Furious 7 wheezes anxiously past a series of elaborately staged car stunts that get you excited but eventually leave you exhausted. Unlike the others times the actors this time don't seem to be having fun. Walking on thin ice, the plot cracks under the weight of fluffy and fatuous daredevilry. This time the franchise regulars are joined by Nathalie Emmanuel who plays a hacker with a game-plan.


"Do hackers really look like this?" Tyrese Gibson ogles and leers appreciatively.


The 3D effects are nothing to rave about. But then you are talking to a non-believer. Devotees of the Fast & Furious series would probably shed a tear or two at the end when the late Paul Walker drives off into a deserted road to the sound of a schmaltzy song.


Walker is out. Death seems the only remedy to the franchise's actors' licence to continue with the series. In an interview Vin Diesel said he felt Furious 7 should win the Oscar for best picture. He wasn't joking. How could he? Crashing cars into places that Rohit Shetty never imagined existed, is no laughing matter. Desperately fast- paced and so eager to grab viewers by their eyeballs and balls, it is embarrassing Furious 7 is a swanky mess.


I watched the film in Hindi just to see how the dialogues pan out. The funniest thing about the linguistic makeover is Tyrese Gibson's original African-American slang's cheesy conversion in Hindi to the Mumbai tapori language.


That apart nothing is lost in translation. Furious 7 has nothing to lose. Oh yes, our own Ali Fazal shows up in a delightful cameo in Abu Dhabi. Unlike the film it's short and likeable.

Ali Fazal catches up with Fast And Furious 7…

Throwback: How Hollywood has been ruling…

Check out: Ali Fazal at the Great Wall of…

6 Reasons why Hollywood is now a serious…

Check out: Sonakshi Sinha as the 'Iron Man'