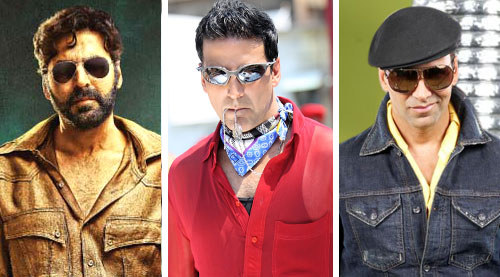 Akshay Kumar's Gabbar Is Back is all set to arrive on screens and this is yet another instance of the actor trusting a new director to deliver at the box office. Krish (Radha Krishna Jagarlamudi) is the man in question who is making his Bollywood debut with this film. Though the 36 year old director has made four films down South, with Gabbar Is Back, he would be getting his Bollywood break.

Here is looking at 12 Akshay Kumar films from the past where a newcomer director has called the shots.

Sajid-Farhad - Entertainment
In the current times, brothers Sajid-Farhad are inarguably one of the most commercial writer duo in the industry. In fact it was long awaited that they turn into a director 'jodi'. Hence, when they approached Akshay Kumar with the script of Entertainment, and that too with a dog alongside for a parallel lead, the actor was more than happy to give his nod of approval. The actor went by his instinct and while the film did reasonably well commercially, it pretty much 'crashed the satellite' by enjoying a huge TRP on its small-screen arrival.

Ashish R. Mohan - Khiladi 786
When Akshay Kumar resumed his Khiladi innings, it was with Ashish R. Mohan's Khiladi 786. Though the film wasn't really a quintessential 'khiladi' flick, the newcomer director played as per the template of a 'masala' action comedy and had something to offer to the masses. The reviews were mixed but funny situations and chartbuster music by Himesh Reshammiya ensured that the film sailed through comfortably.

Sajid Khan - Heyy Babyy
In the recent times, one filmmaker with whom Akshay Kumar has given three successes in a row is Sajid Khan. Their journey started with Heyy Babyy which was Sajid's first ever feature film outing (if one leaves aside a short story he had directed in Darna Zaroori Hai). The film was a clean hit and the actor-director 'jodi' went on to deliver a hit and a superhit in Housefull and Housefull 2 respectively.

Sabbir Khan - Kambakkht Ishq
In Sabbir Khan's Kambakkht Ishq, Akshay Kumar has enjoyed the biggest opening ever with a debutant director in his career. A rich looking film which had some attractive promos and chartbuster music doing the trick, Kambakkht Ishq also stays on to be one of the most expensive films coming from producer Sajid Nadiadwala. The film was panned but managed to stretch to Rs. 50 crore mark, courtesy its very good opening.

Rohit Dhawan - Desi Boyz
Desi Boyz fell a little short of the Rs. 50 crore mark though for debutant director Rohit Dhawan it was still a start being made. He and Akshay Kumar were collaborating on quite a few ideas, including the one which featured a monkey too. However, the one finalized by Akshay and David Dhawan's elder son was Desi Boyz which tried to walk the thin rope of narrating an adult theme for a family audience.

Anthony D'Souza - Blue
Touted to be the most expensive film ever on its release, Blue was a biggie which was widely anticipated by trade, industry and the audience. First time director Anthony D'Souza showed that he had a flair for technique and brought in some of the best action sequences ever filmed for a Bollywood flick. The film saw a huge opening at the box office and settled as a average affair.

Vijay Krishna Acharya - Tashan
If not for the disagreement between Yash Raj Films and multiplexes, Tashan could have done somewhat better. Though the film by itself wasn't any great shakes, Akshay was clearly the best part of this multi-starrer affair. Moreover, debutant director Vijay Krishna Acharya showed well in advance that he had an eye for style, something that makes him the director behind the second highest grosser ever (Dhoom 3) today.

Shirish Kunder - Jaan-e-Mann
When Jaan-e-Mann was announced, it was hot indeed due to coming together of Akshay Kumar, Salman Khan and Preity Zinta. With Sajid Nadiadwala sparing no expenses, debutant director Shirish Kunder had the stage set to go all out; something that he did by bringing on an experimental narrative with this triangular love story. The film flopped due to face-off with Don, but is remembered very fondly today.

Vipul Shah - Aankhen
His close friend and business associate, Vipul Shah has made films with Akshay for over a decade now. It all started with Aankhen, which was one of the most unique ideas that the filmmaker conceived that involved a heist dramatic thriller. The actor was thrilled and while the film turned out to be a good success, he went on to do films like Waqt, Namastey London and Action Replayy with Vipul.

Neeraj Vora - Khiladi 420
One of the rare films where Akshay Kumar didn't quite play a winning innings with a first time director, Khiladi 420 came at the time when the actor was looking at extending his winning streak with Khiladi franchise. The film had wonderful promos and a terrific first half. However, the second half proved to be a spoiler, hence resulting in the film's downfall. Akshay's dare devil stunts are still remembered though.

Naresh Malhotra - Yeh Dillagi
If Akshay worked with a first time director in Yash Raj's Tashan, he had agreed to do the same with the production house's Yeh Dillagi too which came to him very early in his career. While Saif Ali Khan went on to do 'Ole Ole', Akshay won hearts with his sober and restrained act in the film that had Kajol as the center of attraction. Director Naresh Malhotra didn't enjoy a long inning after that.

Guddu Dhanoa - Elaan
At the time when action films with high decibel action promised good returns at the box office as long as the story was told in a fast paced manner, debutant director Guddu Dhanoa did what Rohit Shetty has been doing with his action films today. Flying cars, high speed chases, bullets being sprayed - Akshay battled it all with Elaan, a box office success, and followed it up with Tu Chor Main Sipahi and Aflatoon.