After scoring a massive hit with Baaghi 2, Tiger Shroff is soaring high on the film. Instead of enjoying the success of the film, the actor has straight away dived into his next film, Student of the Year 2. The film is a sequel to Karan Johar's 2012 film, Student of the Year. The film gave a platform to Alia Bhatt, Sidharth Malhotra and Varun Dhawan. With SOTY 2, the film will be introducing debutantes Tara Sutaria and Ananya Panday. 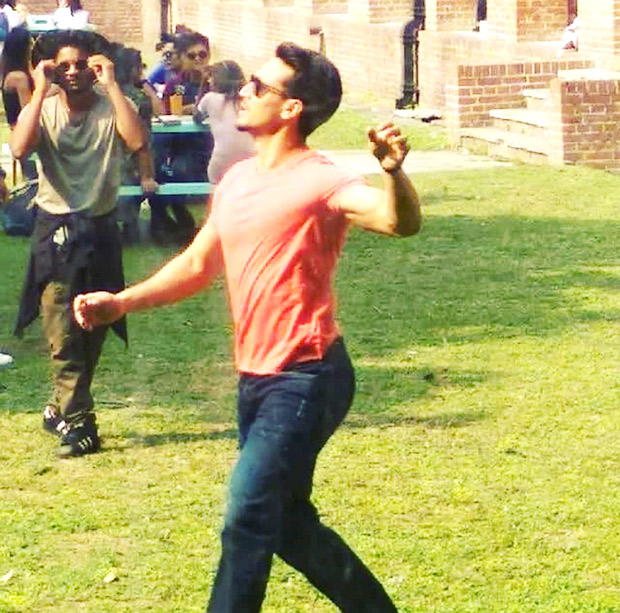 As the shooting began earlier this month in Dehradun, the cast and crew of Student of the Year 2 are working tirelessly to complete their first schedule. We shared a couple of leaked images from the sets of the film. This afternoon, we came across a couple of videos of Tiger Shroff shooting at the campus of the college. He was seen shooting a song amidst several background dancers. The shoot was being done in the corridors of the college. In another leaked clip, Tiger Shroff was seen doing an insane flip which he is known for. The massive surrounded around the shoot cheered for the actor as he did the flip very smoothly.

Student of the Year 2 is directed by Karan Johar’s protégé Punit Malhotra. The director has earlier helmed Sonam Kapoor- Imran Khan's I Hate Luv Storys. He is also currently helming many advertisement shoots for Dharma Productions' sister company, Dharma 2.0. The much-awaited sequel, Student of the Year 2, is set to release on November 23, 2018.

Also Read : Student Of The Year 2: Ananya Panday’s enthusiastic vote of thanks will give you a peek into her effervescent screen presence (watch video)