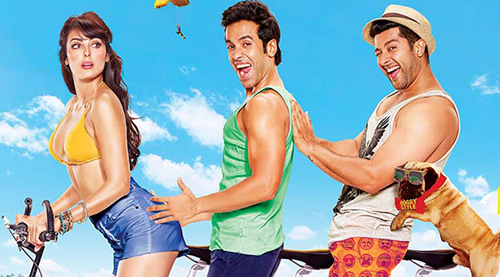 Ekta Kapoor's The Dirty Picture gave this famous mantra that the audience only needs, "Entertainment entertainment and entertainment". The recently released crappily

made sex comedy Kya Kool Hain Hum 3 also uses this adage but when it came to serving entertainment, the menu was stale and unappetizing. The public reaction for the movie was negative with

reports of people walking out of the theatres much before the film ended.

filled up theatres to watch Grand Masti in huge numbers. So why is it that the women are walking out of Kya Kool Hain Hum 3 and in a way telling the makers that, what do you think,

There is no problem with making a sex comedy. But the problem arises when a supposed comedy film doesn't make you laugh. The film is comprised of many gags with the predictable banana fixation,

blatant objectification of women and crude ghisa pita sexist jokes. Mandana Karimi is supposedly the heroine of the film and she has been shown on the promotional material everywhere. But it is

Giselle Thakral and Claudia Ciesla who have more screen space. The shameless manner in which Claudia and Giselle gyrate and pout is highly demeaning of women. Many are of the opinion that with

Mandana locked inside the Bigg Boss house, the film's marketing strategy went for a toss and the necessary buzz was missing. Did Mandana have to suffer the ruthless scissors on the editing table to

pay the price of her non availability?

Balaji Telefilms is such a premium production house. They have made such classy films as Shor In The City, The Dirty Picture, Once Upon A Time In Mumbai, Lootera etc. It is unacceptable that

Hain Hum 3 are highly uneven, choreography is lopsided and shockingly the lip syncing is all over the place. There's a wide gap between the dialogues and the lip movement at many occasions.

Many of the dialogues have been butchered on the censor table and when we saw the details about those dialogues, we thought that why this massive desperation to titillate the audience at any cost.

A film like Hunterr had sex as its overt theme but it was presented in a cool and polished manner. Many of the dialogues were artistic yet massy. Poetry with sex as its theme is an intrinsic

coming up. We genuinely hope that the master planner Ekta Kapoor will personally look into fine tuning these films so that her esteemed production house doesn't get backlashed. Everyone must

understand that the audience is not foolish and they won't settle for a substandard boring product. Period.