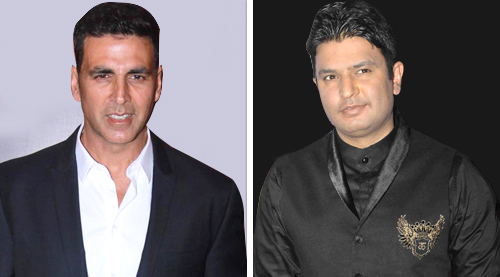 How often do you see an actor and producer combo that works well film after film on the big screen? Well actor Akshay Kumar and producer Bhushan Kumar are just that, with not one or two but three consecutive hits in the form of Bhool Bhulaiyaa, Baby and now Airlift.


While Baby was termed as a dramatic action packed thriller, Airlift which tells the tale of one of the largest evacuations in recent history has been receiving rave reviews from the critics and audience alike. Commenting on the same, the actor says, "Bhushan and I work well together. He takes care of the music and I take care of the rest." Adding in the same breath Bhushan says, "For Baby, songs were not an integral part of the narrative and I understood that. However, I wanted to be associated with the film because it was a fabulous script. It also had Akshay and Neeraj Pandey associated with it."


Further talking about the balance the two struck for Airlift, Akshay added, "Once again, songs were not important to this film, yet Bhushan found a couple of soundtracks like 'Soch Na Sake' and 'Tu Bhoola Jise' that fit in and were completely unobtrusive to the narrative. Both songs are hits and I salute Bhushan for that." The Bollywood superstar continues, "When Bhushan is expressing his happiness over something, he is genuine. I remember what he said around the time of Baby. He said, Akshay sir, Baby may have done a 'box office business of 90 cr'. However, it got me the 'respectability of a 200 cr project'. Likewise with Airlift, I could feel a sense of pride in his voice when he called to tell me the response to the film from across the world."


Bhushan says, "By now, Akshay sir and I have earned each other's trust. I'm hoping to take our association forward with many more projects." Flashing his infectious smile, Akshay adds, "Even after 26 years in the industry, these are the words I want to hear. If my producers are happy, then I'm happy. After all, my forefathers do not belong to cinema. Somewhere deep within me is an insecurity on whether I will find work or not. When a producer smiles and reassures me that he wants to work with me again, it makes me extremely proud. It means I am doing something right. Frankly, that's all I have wanted."