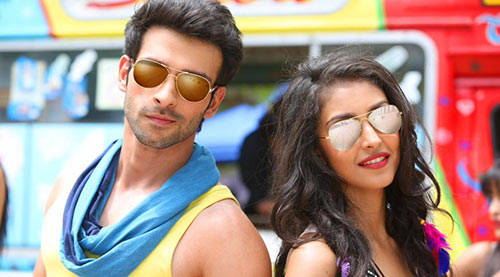 What can the addition of a catchy song too? Well, a lot, when it comes to the eventual build-up for a film. This is what has happened in case of Loveshhuda, which is now being planned for February 19 release, after it had seemed that the stage was set for February 5 arrival.

"The inclusion of Punjabi-Hindi-English track 'Chitta Kukkad' has proved to be a blessing for all involved," says a source attached to the film, "The song has a quintessential Punjabi celebration feel to it, courtesy the wedding atmosphere in which it is based. Once the song was added to the film, director Vaibhav Misra felt that a few more nips and tucks around it in the narrative would enhance the overall appeal in a big way."

Though this would have meant a slight delay in the film's arrival, he was truly of the opinion that it was better to get the film right and all the more entertaining, instead of going through with the original release plan just because it was announced in advance.

"For Vijay Galani, the film's producer, it was a call that had to be taken soon enough, since the film was less than 10 days away from the release as per the original plan," the source continues, "He is so much attached to the film and passionate about it that he didn't hesitate one bit in consenting to Vaibhav's suggestion. As a matter of fact he felt that good promotion of 'Chitta Kukkad' would further help reaching out to the target audience, since earlier tracks like 'Peene Ki Tamanna', 'Dono Ke Dono Single' and of course the chartbuster 'Mar Jaayen' had already done the trick."

For the 'jodi' of Girish Kumar and Navneet Dhillon, it is only a blessing a disguise since now they would be able to attract an even larger chunk of youngsters towards this unconventional romcom with a unique lingo that has its USP in the 'story that starts in bed'!