Koffee With Karan 7 promises to brew interesting conversations and hot gossip. And the last episode with cousins Sonam Kapoor and Arjun Kapoor was an entertaining one with the actress spilling beans about her brother’s personal life. The next guests on the couch are a unique pair of Punjabi munde – Vicky Kaushal and Sidharth Malhotra. During their conversation with filmmaker Karan Johar, the filmmaker revealed that he and Alia Bhatt drunk dialed Vicky Kaushal once and it was right before his wedding to Katrina Kaif. 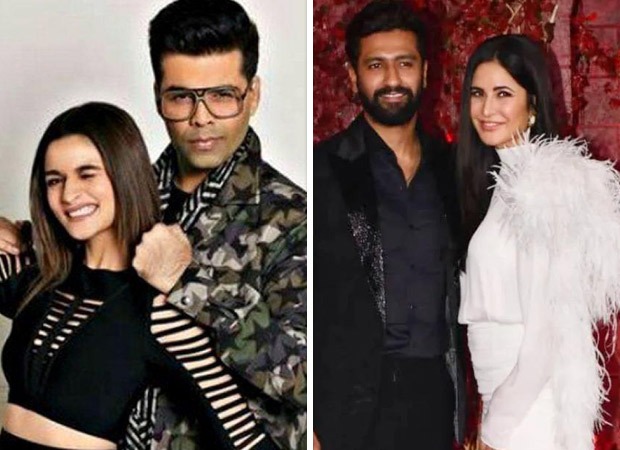 Koffee With Karan 7: Karan Johar reveals that Alia Bhatt drunk-dialled Vicky Kaushal before he got married to Katrina Kaif

Readers would be aware that the Vicky Kaushal and Katrina Kaif love story started from the Koffee With Karan couch. It seems that the couch manifests your wishes and something similar happened when the two actors casually spoke about each other during their appearance. While these episodes aired in 2018, in 2022, the couple is now happily married. They tied the knot in a private ceremony in Jodhpur in December 2021.  It seems that, right before that, Karan Johar and Alia Bhatt were enjoying a wine session when they drunk dialed the Uri actor.

Recalling the incident during the show, Karan Johar said, “Alia and I once drunk-dialed Vicky. We were drinking wine and star gazing, and that is when we were wondering who we could call. This was right before the wedding.” The host also expressed his happiness over the marriage of Vicky Kaushal and Katrina Kaif, said, “We both have known Katrina for a long time. We got to know you later. Her getting married made us so emotional and happy.”

Besides this, Karan Johar is also discussing about the ongoing rumour about Sidharth Malhotra and Kiara Advani. Koffee With Karan 7 airs only on Disney+Hotstar on Thursdays at 12 am.

Also Read: Koffee With Karan 7 Exclusive: Karan Johar reveals about a deleted scene from Student Of The Year: ‘Wanted to justify how Sidharth Malhotra’s character got all his trendy clothes despite being a middle-class boy’